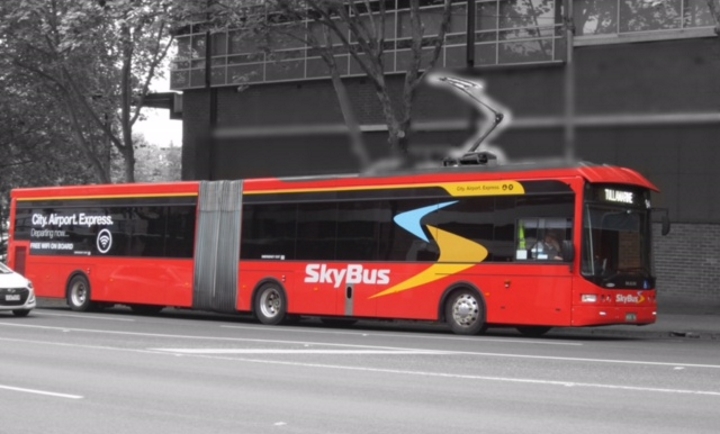 “We have seen a massive increase in demand for transport to the airport, and something had to be done. This new service makes great sense, it’s immediate and it’s cost effective”, said PTUA president Dr Tony Morton.

The PTUA understands that the State Government and Transurban have agreed that the recently added lane on Citylink and Tullamarine Freeway will be a dedicated lane for the track-free trains.

It is understood the state government will subsidise passenger fares, and that Transurban will receive a “toll” for every passenger carried in the train-lane. Transurban said the train-lane would carry far more people than cars, with capacity for up to 9000 people per hour. “This will benefit all Citylink users. More people will use the reliable express track-free train, meaning less cars clogging up the road to the Airport, which is great news for our Citylink customers.”

Passengers will not be required to carry eTags.

PTUA understands the track-free train fleet will be “all electric” and locally built, benefiting both the environment and local industry. An insider hinted that gantries would be installed at Southern Cross and Melbourne Airport, allowing the track-free trains to recharge as they pass through the terminals.

“Melbourne is growing rapidly, and passenger volumes through Melbourne Airport have increased by 13% in the past 2 years”, said Melbourne Airport. “We have been calling on the government to build a rail link, but something needed to be done sooner. The track-free train service is a fantastic response, and we look forward to working with the state government to make it happen.”

Dr Morton said that “The PTUA still wants to see a rail line to the airport. Although a track-free train might not be as effective as an actual train, this is a big step forward.

“The dedicated lanes will make a huge difference. You’d have to be stark raving mad to widen a motorway but leave one of Melbourne’s busiest public transport routes stuck in the traffic jams.”

The Skybus Citylink Airport Maxi (SCAM) service is expected to commence with the opening of the new Citylink lanes on 1 April.