The Public Transport Users Association today published an open letter to Premier Napthine in the Herald Sun reminding the Government of their promise to fix public transport rather than build the East-West toll road.

“With our public transport network falling apart, Victorians are shocked that the Government is prioritising this half-baked toll road project without a public business case rather than fix public transport as they promised,” Dr Tony Morton, President of the Public Transport Users Association, said.

The letter, signed by more than 200 Victorians including the Mayors of four local Councils demonstrates that the community opposition to this road is not only sophisticated by well resourced.

“Without an opportunity to vote on this project, Victorians are using other avenues to have their voices heard,” Dr Morton said. “People from across Victoria are getting active on this issue because everyone has so much to loose if this toll road gets built,” said Dr Morton.

“This project is being hastily brought forward despite recommendations that further planning is required and despite the fact that Victorians have not had a chance to vote on this project,” said Dr Morton. “Napthine might think it is OK to approve an $18 billion project despite plans not even being finalised, however, Victorians do not.”

“When it comes to the primary question of whether this toll road is the number one transport priority for Victoria – the answer is a resounding ‘No’,” Dr Morton said.

“The Government needs to realise that the community are ready to do whatever it takes to stop these contracts being signed,” warned Dr Morton.

“Raising the money to print this letter in the mainstream press is just the start. The Victorian community has the capacity to challenge this project on multiple fronts using all the legal options at its disposal.”

Many believe that the Napthine Government will not be able to get contracts for the East-West toll road signed before the Victorian State election in November.

The open letter can be read via the Public Transport Not Traffic website: http://www.publictransportnottraffic.org/openletter, or below: 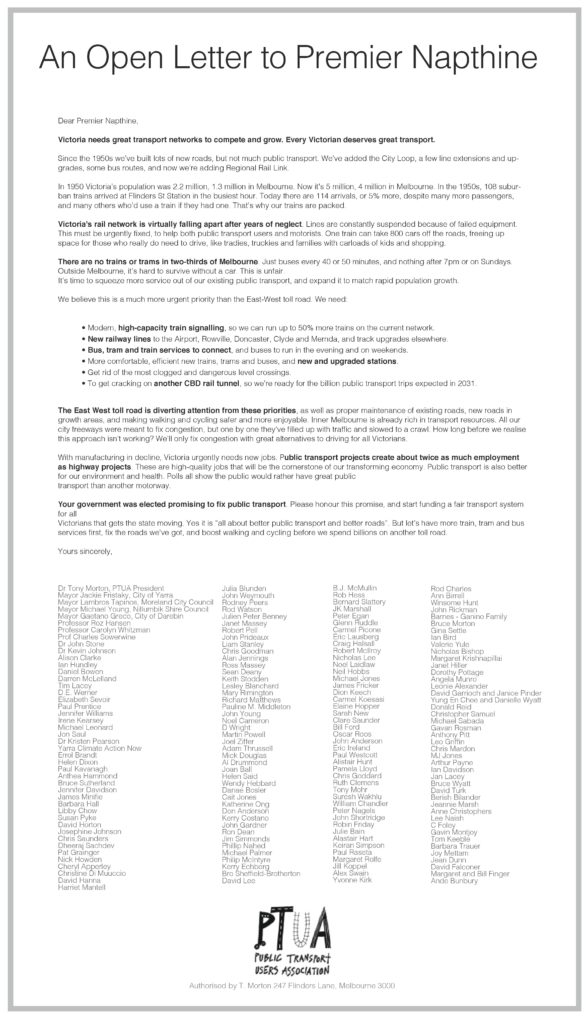