As featured in The Age this morning, the PTUA has looked at the carbon emissions per person kilometre for a range of cars of various types and sizes, and compared them to the different forms of public transport. 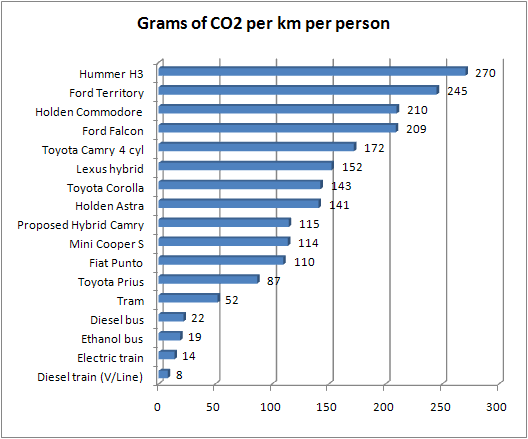 It’s clear from emissions figures that public transport is the greenest option, with carbon emissions far below those of cars.

Climate scientists are increasingly flagging that emissions have to be drastically reduced, and quickly, and meanwhile family budgets are suffering enormously from spiralling petrol prices. It could take hybrid cars decades to become a substantial proportion of the car fleet, and even then, they reduce fuel consumption and emissions by only about 30%.

A trip in an a “green” Toyota Prius hybrid still generates around five times the emissions of a trip by electric train. And while electric trams and trains can have their emissions cut to zero if they are switched to 100% Green Power (as Yarra Trams is trialling now), emissions from fossil-fuel powered vehicles are going to get worse in future, because oil is running out, so more effort will be needed to get it out of the ground. Extremely polluting alternatives such as shale oil, tar sands and coal-to-liquids would cause even more emissions.

Providing better public transport, running frequently across all suburbs, would help more families to cut their driving, not only protecting them from future petrol price rises, but cutting emissions as well. A substantial upgrade in services is a vital step towards achieving a big cut in transport-related carbon emissions.