Myth: If people have to transfer, they won’t make the trip
Fact: Overseas experience shows us that when transfers are made convenient, and connecting services turn up within a reasonable time, people are happy to transfer from one service to another. Indeed, more people make transfers than complete their whole journey on one vehicle!

It’s a commonplace observation in Melbourne that few people transfer from one public transport service to another when making a trip, particularly in the suburbs. People walk to the station; some drive; very few (it’s thought) arrive on the bus. Transferring from one bus service to another is almost unheard of.

Government planners and commentators have often used this observation to claim that people are allergic to making transfers. At worst, this is used to bolster the myth that public transport can never work in the middle and outer suburbs.

People living in the suburbs will not use railway travel to jobs, retail or entertainment centres that are dispersed through the suburbs, since their rail journey will usually have to be accompanied by some other mode of transport, such as by bus. A private car will always be preferred.

Alternatively, the supposed disinclination for people to change between services is taken to mean bus routes (in particular) have to be laid out to connect as many different points as possible, so people can travel between these points without having to transfer. The result is ‘wandering minstrel’ bus routes that are twice as long as they need to be, take twice as long to get from A to B as they should, and that duplicate other bus routes over much of their length. Not only are such routes grossly inefficient; they also offer a much slower trip than the car, and so don’t attract many passengers.

The buses literally go all around the houses, so it takes a long time to get into the centre of Geelong, which is annoying because it’s not far distance-wise. I wouldn’t use the service from here if I had any alternative.

It doesn’t have to be this way. The reason people in Melbourne and other Australian cities largely don’t transfer from one public transport service to another is simple: either they can’t (because stops for different services aren’t convenient to one another), or they’re put off by unreasonably long transfer times. No effort is made to coordinate different services, even between buses and trains that notionally ‘connect’. All too frequently, buses are timetabled to arrive at a railway station a couple of minutes after the train leaves, or to leave the station a couple of minutes before the train arrives.

Efforts to fix the most egregious instances of this meet with bureaucratic inertia. An example is the 536 bus service in Glenroy, which runs as a local feeder between Glenroy and Gowrie stations. Until 2006, both the bus and the connecting trains ran every 20 minutes off-peak on weekdays; however, the bus was timetabled to arrive at Glenroy station two minutes after the city-bound train left, giving passengers an 18 minute wait. (In case you think this was in order to provide a good connection at Gowrie at the other end, the waiting time for the bus at Gowrie was 12 minutes, still longer than if buses ran purely at random!) For years, the PTUA had suggested that shifting the timetable just five minutes earlier would vastly improve connections at both ends (and would improve things in the reverse direction also). Each time, we were told that it would be too costly, or the drivers’ union wouldn’t allow it, or even that it would be inconvenient for passengers!

In 2006 the timetable for the 536 bus was finally changed – but not for the better. The change reduced the off-peak frequency from 20 to 25 minutes, the reason given being that increased car traffic was slowing the buses down so they could no longer meet the 20-minute timetable. If there’s the slightest consolation for the users of this bus getting a less frequent service, it’s that the chance they’ll get a half-decent train connection is now slightly greater than zero!

I RANG Metlink last week to offer feedback on Ventura Bus Lines’ 703 service from Blackburn railway station, only to be told that I had to understand that the bus and rail timetables have not been designed to connect with each other because the bus and railways are run by completely different companies.

Never has Metlink been more of a misnomer, it seems.

In cities other than Melbourne, where public transport is properly planned so that it doesn’t suffer from these bizarre anomalies, people are only too happy to transfer. In Toronto, three-quarters of train passengers arrive at the station by connecting bus or tram, compared with just 10 per cent in Melbourne. And there are throngs of people at each bus stop, many of whom have just got off another bus. It helps that in Toronto, bus stops are located at the same corner of intersections wherever possible to make bus-bus transfers easier, and buses pull right into the paid area of railway stations so that passengers can transfer from a bus to a train without even having to pull out their tickets.

Overseas experience tells us that the best way to run public transport is with simple, direct routes that combine into a network, in such a way that transfers are made as easy as possible. This means that a much larger range of trips can be catered for with a comparatively small number of routes, a phenomenon known as the ‘network effect’ (see the Appendix). This can be seen at work even in Melbourne, on those few parts of the network where transfers are easy, such as at Flinders Street station and some inner-city locations where tram routes intersect.

In Melbourne, we are wasting money running empty buses on tortuous, overlapping routes because of a bureaucratic superstition about transfers. We could do much worse than learn from other cities with effective, well-used systems.

Technical Appendix: A Visit to Squaresville

The ‘network effect’ helps explain the phenomenal success of communication technologies like mobile phones and the Internet once they reach a certain ‘critical mass’. But it can also be applied to explain the success, or lack thereof, of public transport systems.

Paul Mees, in his book A Very Public Solution, illustrates the network effect in transport using the hypothetical city of ‘Squaresville’ (which actually first made its appearance in the Environment Effects Statement for CityLink). Squaresville is a city of 100 blocks, bisected by a grid of north-south and east-west arterial roads spaced 800 metres apart. (Many Melbourne suburbs, such as Brunswick and Waverley, provide good approximations to Squaresville.) For many years, the Squaresville Bus Company had provided buses on the north-south roads, but not on the east-west roads. The map below shows the bus routes in red, along with the coverage of a single bus route in blue, and a single block in pink:

In Squaresville there was once a ‘city centre’, located off the north side of the map. The north-south routes once carried commuters to this centre and back again. But now the old city centre has declined, and trips are completely dispersed. Each block generates 10,000 trips a day, 100 to each of the 100 blocks including itself. But the bus routes, historically oriented in one direction only, were inadequate to service all these trips. The 10 blocks through which a single bus route passed generate 99,000 trips a day (excluding those within the block itself), but only the 9,000 trips going directly north or south could use the bus. So the 10 bus routes combined could only service 90,000 of the 990,000 inter-block trips, limiting the mode share by public transport to less than 10 per cent. Of those people who could use public transport, only one-third actually did, so that public transport actually accounted for 30,000 trips a day out of 990,000, for a mode share of about 3 per cent, similar to the outer suburbs of Melbourne now.

Eventually the government responded to public concerns about the chronic traffic congestion and pollution in Squaresville, and created the Squaresville Transport Authority to plan ways to entice more people onto public transport. The first option they looked at was to introduce 10 more bus routes going east-west (shown green on the map): 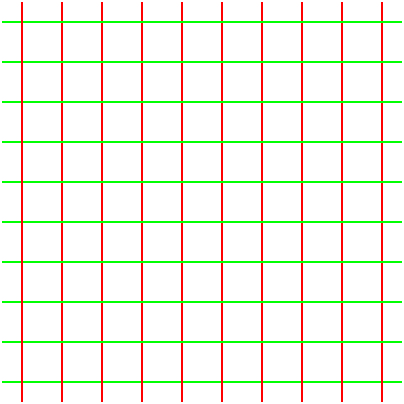 Obviously these new routes allowed people making direct east-west trips to use public transport for the first time. But something else became apparent: with just one transfer from bus to bus, it was now possible to travel from any block to any other! Instead of being restricted to servicing at most 10 per cent of trips, public transport could now potentially service all of them.

But of course the planners were conservative: they knew that even those with a choice only used public transport one-third of the time on average, and they’d heard plenty of stories from their Melbourne colleagues about how much people hate transferring. So they assumed that one-third of those making a direct east-west trip would use the bus (as was the case with north-south trips) but only 10 per cent of those whose journeys required a transfer would use the bus. Then they tallied the trips by public transport that would result:

So by adding another 10 routes to the existing 10 routes, patronage could be expected to increase from 30,000 trips a day to 141,000 trips a day; an increase of 470 per cent from a 100 per cent increase in services! This disproportionate increase in patronage is due to the network effect: when individual services combine into a network, the number of origins and destinations that can be connected vastly increases.

As it turns out, a planner from the Squaresville Transport Authority had a sister living in Toronto, who told her about all the things Toronto had done to make transfers easy. When the new bus routes started, stops were placed at intersections, immediately adjacent to the stops for the connecting service. And so it turned out that the proportion of people willing to make transfers was not 10 per cent but 20 per cent, and patronage rose to 222,000 trips per day instead of the planned 141,000 per day—a mode share of 22 per cent compared with 3 per cent on the old Squaresville Bus Company routes. With the extra revenue this brought in, Squaresville could afford to double its bus frequencies from every 12 minutes to every 6 throughout the day.