Myth: We can’t have Rowville trains because there’s no room
Fact: Trains to Rowville via Huntingdale every 10 minutes can be accommodated on the existing Dandenong line, after planned work is done as part of the ‘Dandenong corridor’ project to help unlock the full capacity of the double track. Importantly, the new line does not rely on the ‘Metro’ tunnel under the CBD; this tunnel provides a big capacity boost to the west of the city but makes little difference to the east.

The Rowville and south Knox region is a part of Melbourne, like Doncaster/Templestowe, that developed in the postwar era without thought being given to rail access. In the late 1990s, community groups led by the PTUA floated the idea of a Rowville rail extension as part of the public transport alternative to what is now EastLink. Initially it looked as though an extension of the Glen Waverley line might be the cheaper option, but attention has since shifted to an extension via Huntingdale on the Dandenong line as this takes in more significant trip destinations including Monash University, the synchrotron and several industrial parks.

A train extension from Huntingdale along the Wellington Road median had appeared in the 1969 Melbourne Transportation Plan. Originally it was to extend to Ferntree Gully, but the Rowville to Huntingdale link is now considered most critical in providing access to the greatest number of work, study and shopping destinations. The graphic below shows the line as proposed by PTUA in 2002.

Efforts over the last 15 years to put the Rowville line on the agenda were hindered by the State transport bureaucracy, which remains opposed to major rail extensions serving new areas not on the current network. In 2010 the Baillieu Coalition government was elected on a promise to develop the line, starting with a full feasibility study. Unfortunately the consultants for that study relied on advice from the same bureaucracy that blocked earlier efforts, resulting in the use of flawed assumptions that elevated its cost. (For example, the study stipulated the line be built to a ‘freight standard’ maximum gradient of 2%, when textbooks such as Vukan Vuchic’s Public Transit Systems and Technology give 4% gradients as “typical” and suggest a maximum of 6% is acceptable for urban rail. The adjacent Glen Waverley line has many sections with 3% gradients.)

But the biggest obstacle that has been put in the way of the Rowville line since at least 2007 is the notion that the two-track Dandenong line cannot carry Rowville trains in addition to the existing Pakenham, Cranbourne and V/Line Gippsland services. It’s contended that running trains to Rowville is impossible unless new tracks are added on the Dandenong line, and in any case nothing can be done until after the Metro Tunnel is completed from Footscray to South Yarra.

There is a grain of truth to this notion. The number of trains that can run on the same track is limited by the ‘headway’ designed into our ‘fixed block’ signalling system. A diagram available on the website of private operator Metro Trains shows that the line between Caulfield and Dandenong is signalled for 3 minute headways, and the lines inward of Caulfield for 2.5 minute headways. This gives the Dandenong line a theoretical capacity of 20 trains per hour.

Victoria’s rail planners follow common practice in scheduling services based on a ‘practical’ capacity equal to 80% of the theoretical capacity, to allow for the effect of random delays, dwell times and variable stopping patterns. By this rule, the practical capacity of the Dandenong line is 16 trains per hour. Currently in the busiest hour of the peak, the line carries 14 suburban trains plus two V/Line trains, for a total of 16 trains. This is the grain of truth behind the claim that the Dandenong line is already ‘full’. 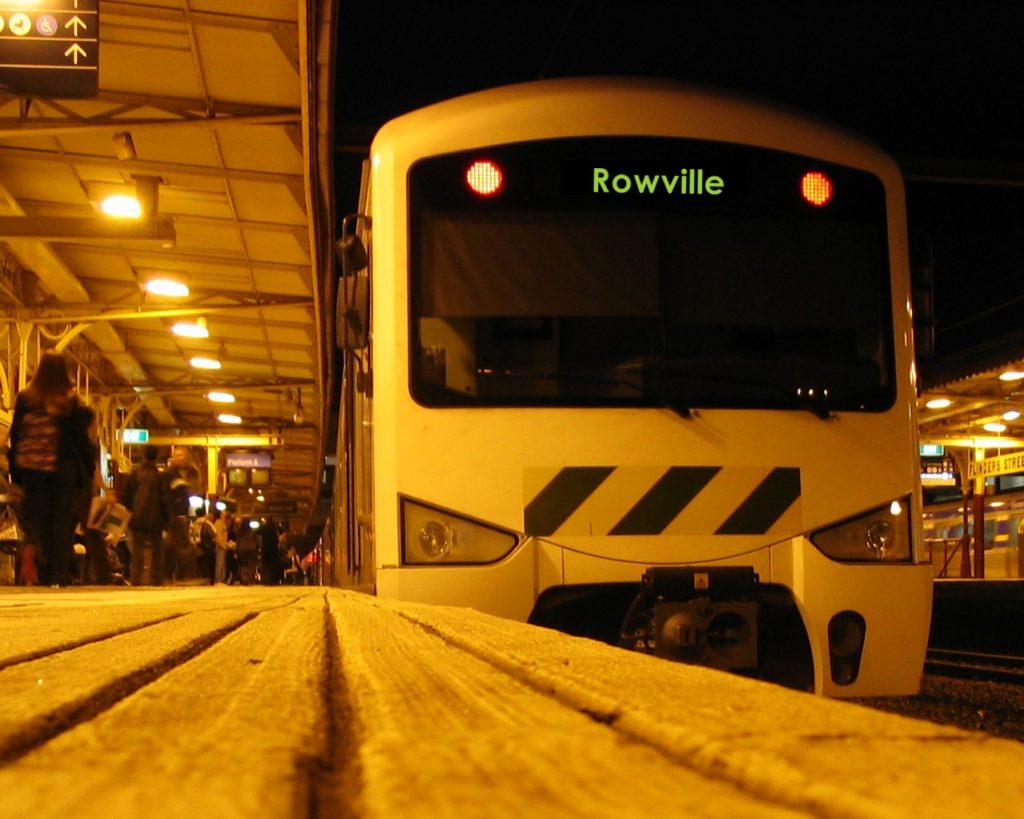 This does not mean, however, that everything works out as soon as one builds the tunnel from South Yarra across the city — or even one from Caulfield. Nothing we do at the city end affects the present design of the signalling between Caulfield and Huntingdale with its theoretical capacity of 20 trains per hour.

In fact, the Metro Tunnel makes no meaningful difference to capacity in this corridor at all. If one follows the tracks in from Huntingdale as they are now, the 2 tracks become 4 when they meet the Frankston line at Caulfield, then 6 when they meet the Sandringham line at South Yarra, then 10 when they meet the four Burnley tracks at Richmond. At no point, in other words, do any two lines have to squeeze together onto one track. Even when one reaches the City Loop, the three lines coming in from South Yarra have three separate paths into the city:

Of course, because of the way the lines are configured it makes sense to use (1) for Dandenong trains, (2) for Frankston trains and (3) for Sandringham trains, so that the paths don’t cross each other. This is close to the way the system now operates in peak hour. The one minor complication is V/Line trains, which have to switch from path (1) to path (2), but this is not too much for the system to handle. In short, the central network can already handle as many trains as are capable of fitting on the suburban double tracks to Dandenong, Frankston and Sandringham. The capacity bottleneck addressed by the Metro Tunnel is to the west of the city, not the east.

So, how are we to face the real challenge: the theoretical capacity of 20 trains per hour (or 16 per hour in practice) on the Dandenong line beyond Caulfield?

One option is to look a bit to the north, at the Ringwood line. For decades, this line has been signalled for trains every 2 minutes as far as Blackburn. With this standard of signalling, the theoretical capacity jumps to 30 trains per hour, and the practical capacity to 24 per hour — the same as in the City Loop itself. With level crossings in the corridor now eliminated, this would provide for a boost to morning peak services as follows:

Six Rowville trains in peak hour is judged to be sufficient, as this line will be relatively short compared with the lines to Pakenham and Cranbourne, and Census data shows there is a significant ‘along the line’ component of travel between Rowville and education or employment destinations in Mulgrave and Clayton. Meanwhile, the growth corridors to the south-east could benefit from a boost in peak services of nearly 25%.

The Andrews Government’s Dandenong Corridor project has already provided most of the upgraded supporting infrastructure required to attain this level of service. It’s understood this brings the Dandenong line at the very least up to the (1960s) standard of the Ringwood line signals, as would be appropriate for one of the city’s most significant growth corridors.

An even better option is to upgrade the signalling technology itself, from the older style ‘fixed block’ signalling to the high-capacity systems that now operate in many European cities. These systems boost the capacity of a rail track to between 30 and 33 trains per hour (based on actual experience in Paris and London). This represents at least a further 25% boost to the number of peak hour trains possible.

An upgrade of this sort, using Bombardier’s Communications Based Train Control (CBTC) technology, now forms part of the Metro Tunnel project, and is currently being trialled on the South Morang line (where there are no complications due to V/Line and freight trains). The Dandenong line is one of the obvious first places for this technology to go.

If a high-capacity signalling upgrade were to be rolled out on the Dandenong corridor ahead of Metro Tunnel completion in 2026, including the track between South Yarra and the City Loop, this could provide all the capacity required for an improved service pattern such as the following:

High-capacity signalling is highly desirable in enabling the Rowville line to proceed, but as we have seen above it is not essential – particularly if there is a longer term plan to introduce it as peak patronage grows further in the next decade. The opportunity exists now for the State Government to undertake planning and construction of the Rowville line in parallel with the Dandenong works.

In short, there are no technical reasons why Rowville train services could not commence prior to Metro Tunnel completion; merely political ones (beginning with the Federal Government’s ideological reluctance to fund urban public transport).