From time to time we hear the suggestion that one way to speed up trams is to move tram stops away from intersections and into mid-block locations. The argument seems to be that when trams don’t have to stop for passengers at the intersection, it is easier to program the traffic lights to let the tram through quickly.

One thing does appear to be true: if a tram is approaching an intersection and does not need to stop, one can detect the tram approaching when it is still some distance away and insert a special phase into the traffic light sequence – much like what happens when a train approaches a level crossing.

However, this technique works just as well when the stop is just on the departure side of the intersection, as when it is in the middle of the next block. One doesn’t have to actually move the stop away from the intersection, only shift it to the departure side. That’s if it really is necessary to apply the principle of railway crossings to tram priority – an alternative strategy would be just to leave the stop where it is, and allow the driver to insert the green phase into the traffic lights when the tram doors are closing to depart, as is done in Zurich and some other cities.

There are many ways to engineer a tramway system so that trams receive full signal priority through intersections. Moving stops to the departure side of intersections is only one possible solution, and may not be the most convenient one for passengers. But on no account does signal priority require that stops be moved all the way to the middle of the block: as we show below, this is the least convenient location imaginable.

In Melbourne, the real motivation for moving tram stops away from intersections is to clear more space for turning cars. In other words, it’s aimed at maximising convenience for motorists, not tram passengers. A good example of this is the stop in Collins Street near Spencer Street; this is supposed to be a transfer point to Spencer Street Station, yet the station isn’t even visible from the stop! The reason is that the stop has been placed about 50 metres back from the intersection to allow an extra turning lane for cars. (The same thing was tried at the Parliament end of Collins Street, but a PTUA campaign succeeded in keeping the stop at the intersection with Spring Street instead of 50 metres further back.)

Street intersections provide by far the most convenient location for tram stops, from the point of view of passengers, for two reasons. The first is that intersections have the largest ‘walkable catchment’: there are simply more locations one can reach on foot in a given time from an intersection than from a mid-block location (see below). The second reason is that intersections provide transfer points from north-south routes to east-west routes, and vice versa. Tram and bus networks function most effectively when people are capable of easily transferring from one route to another in order to access a wider variety of destinations. (This is the ‘network effect’, explained in our page on transferring.)

The ‘pedshed’ concept is one of the tools used by urban planners when deciding on the location of tram and bus stops. (See for example Liveable Neighbourhoods, Western Australian Planning Commission, 2000, Appendix 2.) It stems from the observation that when making statements like ‘location X is within 5 minutes of the tram stop’, what must be counted is the walking distance along the street, not the straight-line distance measured on a map.

The pedshed quantifies how effectively a public transport service ‘penetrates’ its catchment area by comparing the area one can walk to in a fixed time with the overall size of a neighbourhood. Thus, the pedshed in the vicinity of a tram stop is calculated as follows:

It turns out that getting a figure higher than about 70% from this exercise is virtually impossible. Suburbs like North Carlton with rectilinear street grids get about 50-60%, while postwar subdivisions with curvilinear streets and lots of cul-de-sacs get around 10-15%.

The effect of moving a stop away from a street intersection and into the middle of a block can be seen in step (3) of this procedure. Essentially, a large proportion of the 400 metre maximum path length is ‘used up’ just getting from the stop to the cross street, so that overall penetration into the surrounding area is markedly reduced.

We can see this by looking at the rectilinear street network in the following diagram. This shows a network with north-south streets every 200 metres, east-west streets every 100 metres, and a tram stop at the central intersection. The 400-metre walking paths are shown in blue and the catchment in purple. (Individual blocks are taken to be oriented in a north-south direction.) The catchment has an area of 32.5 hectares and the large circle an area of 50.3 hectares; thus the catchment is 65% of the area of the circle, and the pedshed is 65 per cent.

The next diagram shows the effect of moving the tram stop to the middle of a 200-metre block. The shaded area is now just 28.6 hectares, for a pedshed of 57 per cent. 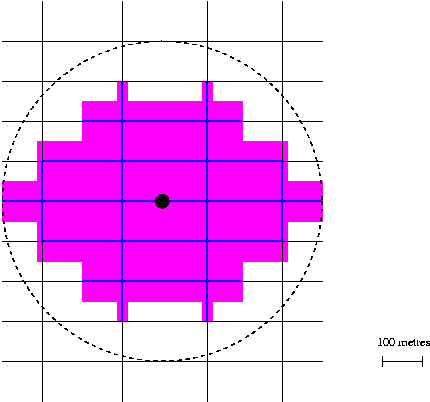 A seemingly innocuous relocation of a tram stop by just 100 metres has led directly to a reduction in ‘walkability’ by 12 per cent in relative terms.