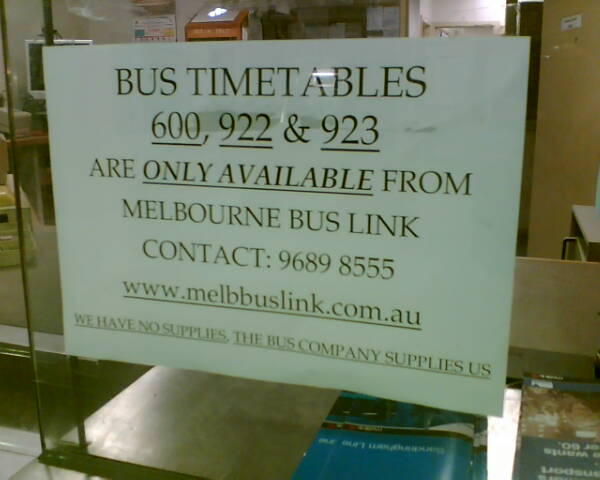 In 2005 the Victorian Auditor-General released a report into the process underlying the second privatisation. This was the first time actual figures for payments to the train and tram operators had been reported, and showed that the operators are receiving nearly twice the amount the PTC were paid (in real terms) to operate the system in 1999. Part of this increased subsidy could be explained by the purchase of new rolling stock and modest service improvements since 1999, but a large component of the increased subsidy remains unexplained.

Meanwhile, despite the fact that growth in train patronage has fallen well short of the 67% to 84% to which operators committed in the 1999 contracts, train operator Connex now alleges a ‘capacity crisis’ in the suburban rail network. Apparently, operator difficulties which resulted from too few passengers back in 2002 now result from too many passengers in 2007. While there has been unusually strong patronage growth from 2005 onward (largely a fortuitous consequence of rising petrol prices and CBD employment, as there was no identifiable service initiative to which passengers were responding), the total patronage of 170 million train passengers in 2006 is still well short of the 201 million passengers the same system carried in 1950. Similarly, public transport mode share of 8.8% of motorised trips in 2006, while higher than the 7.6% in 2004, is still less than the 9% observed at the time of privatisation in 1999. Most Melbourne train lines are carrying fewer trains and passengers in peak hour than comparable systems in successful cities—even those that, like Zurich’s S-Bahn, have extensive express running.

Disturbingly, the pattern of payments in the Auditor-General’s Figure 2E and the operators’ changing attitude to patronage seems to fit closely the ‘regulatory capture’ scenario cited by Stanley and Hensher (2003): “winning a tender on an artificially low bid, with a view to renegotiating that bid upwards at a later stage by threatening service disruption, presuming that government will be unable to resist political pressure on service continuity.”

By shifting the revenue base from patronage incentives to increased subsidies, the second privatisation subverted the two most important justifications used for introducing the franchising model in the first place: that revenue risk would be transferred from the public purse to the private sector; and that private operators would be enticed to plan and carry out service improvements by the promise of financial incentives. In place of these, the new model establishes a presumption in favour of the status quo. The private operators are neither forced by central planners to make changes to attract new patronage, nor greatly rewarded for doing so on their own initiative. Adding a single new train to the timetable seems to require an immense planning effort on behalf of both the government and Connex; the ZVV and similar agencies meanwhile produce new timetables for all their routes every year. Even the most ‘tactical’ of the functions specifically allocated to government under the second privatisation—the timetable integration of train and bus services—is not happening, and buses continue to meet or miss trains essentially at random.

Through the use of the franchising model, a situation has been created in which all the ‘players’ in the management of public transport have an incentive to collude against the public interest. The private operators have a rational commercial incentive to seek the highest subsidy in return for the minimum level of service (thanks to the absence of a formula tying one to the other) and to minimise their obligations. Officials within the Public Transport Directorate have an incentive to defend the institutional arrangements they devote their efforts to overseeing and which they had a large hand in creating; in practice this means maintaining a good relationship with the operators and holding to the tenets of the franchising model, specifically the presumption that initiative rests with the operator and not with the regulator. And at the political level, as attested by Ministerial reactions to many recent system failures, the government apparently has no interest in or vision for public transport and so has an incentive to shift responsibility to the private operator.

The problem here is not necessarily the existence of a private operator with commercial interests, because private operators exist in many successful public transport systems. The problem is that these interests are not checked by a body acting in the public interest.

Here are just a few examples of what’s wrong:

Example 1: Short trains on weekends. With changing travel habits since the 1990s (when Melbourne was dubbed the ‘seven day city’), the old practice of running three-car trains on weekends led to more and more severe overcrowding. Nonetheless, Connex has for years refused to operate six-car trains. There is simply no reason for it to do so in a privatised system: six-car trains cost more to run than three-car trains, and there is no direct financial benefit to Connex. In Connex’s mind it is unclear that running larger trains would attract any additional passengers (since Connex management inherits a large share of the old defeatist PTC culture), and in any case Connex would only receive 40% of the marginal revenue from new passengers anyway, with the remainder going to other operators’ bottom lines. (So the incentive required for Connex alone to boost services is 2.5 times as great as it would need to be for a central coordinating agency looking to break even across the entire network.) The incentive for operators to cut costs by running overcrowded services is avoided in a subcontracting model through the use of contracts that prescribe standards for passenger comfort, or carrying capacity, or both. But prescriptive contracts are contrary to the intent of the franchising model, which relies on the private operator to act on its own initiative. Only in November 2007 after years of lobbying did the government finally negotiate an amendment to the Connex contract to run six-car trains on most daytime services. So even this modest no-brainer initiative, far from being the Connex ‘innovation’ it was made to look like, actually relied on central planning and public funding to become reality.

Example 2: Preventive maintenance. The matter of Connex’s maintenance practices rarely comes under public scrutiny. On some occasions where part of the road system is unavailable for an extended period (such as the Burnley Tunnel closure in March 2007), Connex will be reported as ‘bringing forward’ its routine train maintenance to ‘boost’ train services. Typically, this will involve scheduling more maintenance on weekends so that more trains are available to run peak services on weekdays. This raises the question why Connex does not do this on a regular basis, to reduce the number of cancellations that occur. The reason may be that it costs Connex less to incur fines for cancellations than it does to pay weekend rates to a larger maintenance workforce. Passenger-focussed operators such as the Swiss Federal Railways or the WA Government Railways have targets for fleet availability and do not operate purely to minimise costs.

Example 3: Care of infrastructure. In well-managed systems, responsibilities are clearly defined right down to the lowest levels—even for such matters as cutting the grass next to railway tracks. Either the train operator is a public agency that owns and maintains the land the tracks run on, like the Swiss Federal Railways or the Toronto Transportation Commission. Or else, it is a contractor (perhaps privately owned) that runs train services on tracks and land owned and maintained by a separate public agency. But in Melbourne, even the authorities aren’t sure who is responsible for what. In November 2007, the local press reported the concerns and frustrations of Hampton East residents about the hazard posed by overgrown weeds and rubbish in a railway reserve adjacent to their homes. While railway land in Victoria is technically owned by public authority VicTrack, they maintain that the franchise regime gives Connex a lease over the land, and the responsibility for upkeep is Connex’s, not VicTrack’s. Connex for their own part maintain that the railway reserve is not their responsibility. The familiar stalemate results: “Bayside Council passes the buck on to the railway, who in turn pass the buck on to Connex, who in turn pass the buck on to privatised contractors, who send different workers each time a complaint is made,” says one resident.

Example 4: Duplication of effort. One function of a transport planning authority is to research and forecast trends in transport usage and passenger behaviour. And indeed, market research is one thing that our planners really do seem keen on doing. So keen, in fact, that market research is done independently by each of the Director of Public Transport, Metlink, the Transport Ticketing Authority, and the individual operators—often using the same consultants. The Transport Ticketing Authority alone spent close to $1 million on market research over an 18-month period (The Age, 4 June 2007). While this is doubtless good for the consultants, the extent of this duplication betrays the lack of central coordination. It is also unclear what is the objective of all this publicly-funded market research: as it allegedly involves asking passengers about such things as their hobbies and preferred sports, it would appear to be as much for the benefit of those who advertise on the system (or might derive a commercial benefit from smartcards) as those who plan it. In other cities public transport is a single network, so there is just one market research ‘customer’ and one objective—to bring more passengers to the system and ascertain what they want from public transport.

Example 5: Yarra Trams boosts services….eventually. In what may seem at first to be a contrasting example, Yarra Trams in March 2007 boosted Sunday morning services on tram route 16, after an article in the local press pointed out the severe overcrowding that routinely occurred because of the increased number of people seeking to travel to St Kilda on Sunday mornings. Although in this case the private operator did improve services, it did so only after being subjected to a combination of media criticism and direct lobbying. In well-managed public transport systems there are processes for monitoring patronage and fine-tuning service levels automatically, so that overcrowding is minimised. In the case of route 16, either there are no such processes (on the part of either Yarra Trams or the Director of Public Transport), or else Yarra Trams knew about the chronic overcrowding but chose not to act until people complained. Neither possibility reflects well on the Director of Public Transport, Yarra Trams, or the franchising model under which they operate.