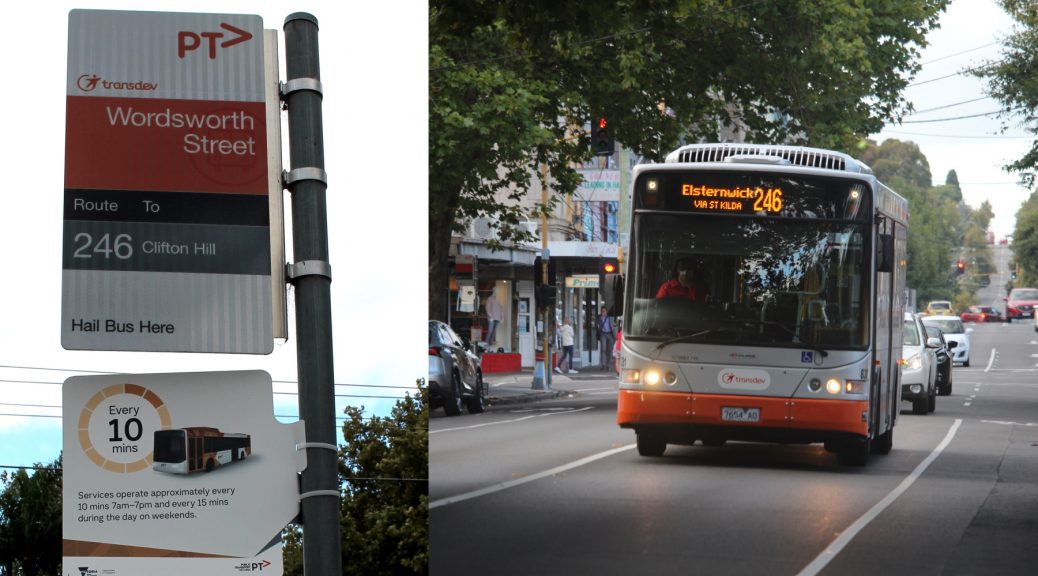 The release of the Victorian government’s bus plan has highlighted many planned initiatives, but one that got some attention is ‘rapid running’. This article from the PTUA’s June member newsletter explains what it means.

If you’ve ever been on a bus that sat waiting at a time point for its scheduled departure time, a new Department of Transport trial might be of interest.

Since March, route 246 has been testing ‘rapid running’. This means that during frequent times (when buses are every 10 minutes) buses will depart from the terminus on time, but then not stop and wait for the schedule along the length of the route.

Instead of using printed timetables, passengers are encouraged to use real-time information on their mobile phone via the PTV or other apps, and of course the high frequency means waiting times don’t normally exceed 10 minutes.

The immediate benefit to passengers is a faster ride once on the bus.

Longer term benefits include that authorities may be able to run additional services without needing extra funding.

We’re also told it can ease the case for on-road priority, as any measures taken to speed up buses are certain to be useful, rather than simply resulting in even longer waits at time points.

So far the feedback on route 246 from local passengers has been mostly positive, in part because the route punctuality is normally so poor due to traffic that the timetables were rarely accurate!

DOT are looking at expanding the trial to other routes, including testing the concept with slightly less frequent routes running at a 15 minute frequency.

PTUA has been consulted on the trial. While we agree that a 10 minute service can work well with this arrangement, we’re not sure if 15 minutes is frequent enough. There are also concerns about passengers without smartphones. That said, we are keen to see what the trial finds.

Since Tram Tracker was introduced more than a decade ago, many tram users have switched to using real-time information instead of timetables.

The provision of real-time information for buses and trains has followed, but some passengers still unaware of it.

Whether ‘rapid running’ ends up on more routes or not, better promotion of real-time information would make a lot of sense.

And certainly on routes with 10 minute services, ‘rapid running’ seems to have a lot of merit.

And of course, Victoria’s public transport network could do with a lot more routes running every 10 minutes.

This article is from the PTUA’s June member newsletter. To get regular news from the PTUA, and support our campaign for better public transport, join as a member.