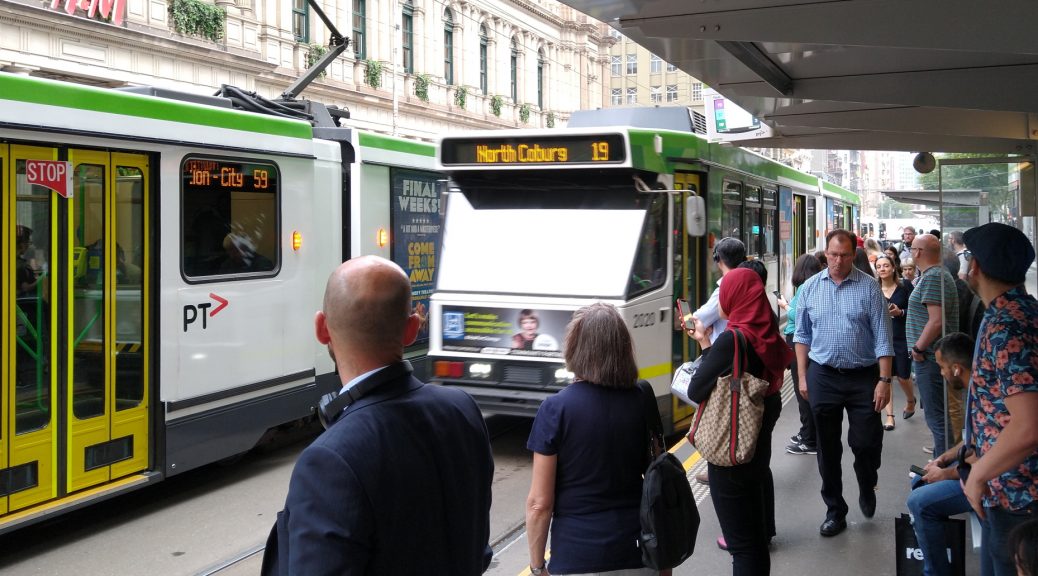 As COVID-19’s second waves wash over our technologically advanced civilisation, so follows the commentary on what this pandemic means for cities and for daily life in the future.

Public transport sits at the heart of the discourse, and for good reason. In normal times, public transport sustains the life of the world’s most celebrated large cities, making possible the organic development of large activity centres drawing on vast metropolitan populations. While country towns and villages function well day-to-day based on foot, bicycle and short car trips, the currency of cities is the ability to gather people in large numbers for all manner of activities, reaching over large distances to cater to mass and niche interests alike, but all within a limited budget of time and space.

This is why COVID-19 poses a direct threat to the city, for as long as it remains at large. Ever since the pandemic threat emerged early this year, public transport has been singled out as a transmission vector. But it’s never been just about public transport. Physical distancing obviously plays havoc with public transport’s ability to gather large numbers, but it also undermines all those activities for which large numbers would gather. Whether it be collaborative work, art or music, sport or entertainment, eating or drinking en masse, COVID-19 debases the very currency of cities.

Even if regular public transport users switch to driving alone to short-cut the threat, as some have recently suggested to Monash University researchers, the real danger may lie elsewhere. The more experience gained with this virus, the clearer it becomes that (for example) avoiding public transport only to spend the day in an indoor workplace, surrounded by possibly infected yet asymptomatic co-workers, is likely misplacing the risk. (For this and other good reasons, calls by unnamed “business leaders” for more CBD car parking so city workers can avoid public transport are best ignored.)

Nor, on the evidence, has public transport proved the stand-out transmission vector it’s feared to be. Although there are a handful of suspected cases of transmission on buses or bus stops in Auckland and Sydney, cities that mandated face coverings have not recorded any such cases. In Paris or Tokyo, for example, detailed studies ruled out the train system as a factor in spreading infections. Though it is always possible for transmission to occur on public transport, it appears that when sensible precautions are taken such as wearing masks and cleaning surfaces regularly, the virus has spread largely by other means.

So are cities themselves the problem? Many jumped to that conclusion during the first wave in the US, when the virus cut a swathe through New York and the heavily urbanised north-east. New York’s relatively high density and transit-oriented urban form was quickly blamed for the spread, despite the fact that east Asian cities with even higher densities – many with popular democratic governments – were successfully controlling the spread. And the US outbreak had much further to go. As of the end of August, seven southern US states including Florida, Arizona and Georgia have more COVID-19 cases per capita than New York.

Cities like Orlando, Phoenix and Atlanta, currently in the throes of COVID-19, are the product of a powerful ‘anti-city’ movement that dates back even earlier than the 1918 flu pandemic. Originally well-intentioned, it idealised a world of orderly self-contained villages where everyone’s needs would be met locally and people would live closer to nature. While superficially attractive, the ideal was in practice far too inward-looking: it had nothing to offer those aspiring to a life beyond that offered by a handful of local employers. Social mobility required physical mobility, and without the mass transit networks that 19th-century cities used to advantage, many 20th-century counterparts succumbed to unending car dependence, congestion and pollution.

COVID-19’s mandate has toppled barriers to working from home, and some believe this does away with the need for people to locate near a fixed place of work. Does this mean we can all live in little villages after all, and communicate electronically with our workplaces? Yet while working from home could take the rough edges off peak-hour commuting, it hasn’t removed the nexus between social and physical mobility. This is obvious to anyone who’s tried to change jobs in the past six months, or works in fields like arts or entertainment that depend on the currency of mass audiences.

If a mass movement to working from home does survive the post-COVID recovery, it will provide a necessary corrective to transport planners’ singular focus on peak-hour commuting. Perhaps there can be a new focus on local bus travel in the suburbs, where service has always been poor (and now, when people have to crowd onto too few services, potentially dangerous). But it also forces a rethink of projects like the North East Link, whose claimed benefits rely on assumed growth in peak-hour commuting for years to come. Our governments can easily turn Melbourne into an Atlanta or a Los Angeles, but this won’t spare us from future pandemic lockdowns.

Perhaps what we gain from all this is a clearer view of what is really valuable about cities. Recall that Melbourne’s centre was never as dead as it was 40 years ago, when it was a destination for 9-to-5 office workers and nothing more. For us to lead our best lives, it’s vital that we smash COVID-19 and emerge on the other side. Though commuting may be less central to our lives then, cities and their mass transit systems will surely remain so.

Tony Morton is President of the Public Transport Users Association.