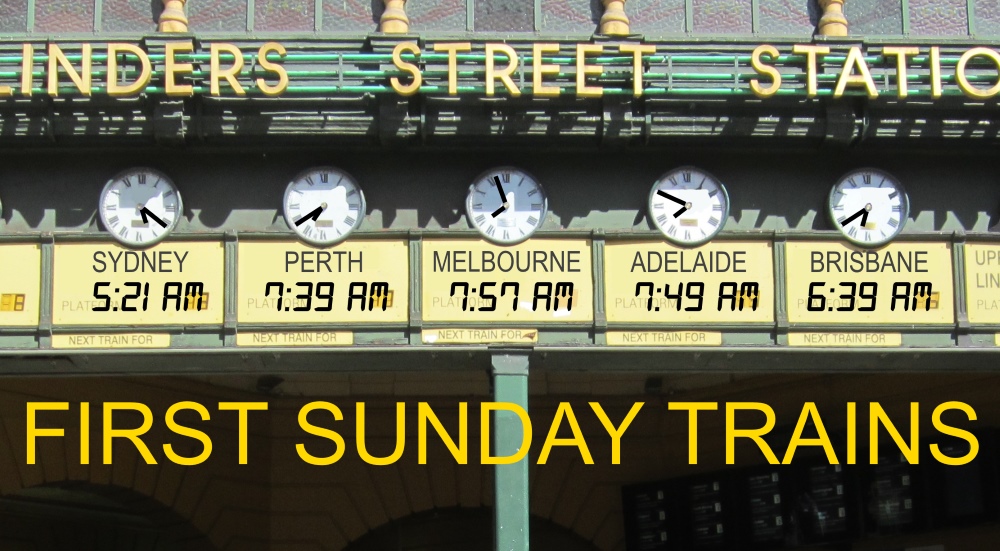 A survey of rail timetables by the Public Transport Users Association (PTUA) has found that Melbourne trains start later on Sundays than any other city in Australia.

PTUA spokesperson Daniel Bowen said the comparison of timetables from Adelaide, Brisbane, Perth, Sydney and Melbourne showed we are lagging behind.

“Last time we looked at this[1], Adelaide’s trains started later than ours. Thanks to service upgrades, they now beat us.

By comparison, Melbourne’s first trains on weekdays and Saturdays arrive in the CBD by 5:30am.

“This causes real problems. Workers with early shifts in the city find they can’t get there by public transport, and have to drive or pay for a taxi.

“Thousands of people racing in fun runs are continually told that they can’t use public transport to get there in time – even when they start in or near the centre of Melbourne.[3]

“Even those trying to make train and plane connections have problems. If you want to catch V/Line’s Sunday morning train to Albury at 7:05am, you can’t actually get to Southern Cross by train – you’d be almost an hour late.”[4]

Labor has pledged all-night trains on weekends, which would mean earlier trains on Sundays, though it’s believed these would only run hourly.

In contrast the Coalition appear to have no plans at all to start Sunday trains earlier in the day.

Mr Bowen said that starting Melbourne’s trains at least 90 minutes earlier on Sundays and running them more frequently would not break the bank, and would make public transport an option for more Sunday morning trips.

“It’s time both sides of politics committed to bringing Melbourne’s trains into the 21st century, with timetables that meet the needs of the world’s most liveable city”, concluded Mr Bowen.

[2] The median time for Melbourne trains’ first CBD arrival in 2011 was 7:56. This has slipped back to 7:57am due to timetable adjustments.

See also: The Age 23/11/2014: Melbourne’s trains start later on Sunday than any other Australian city