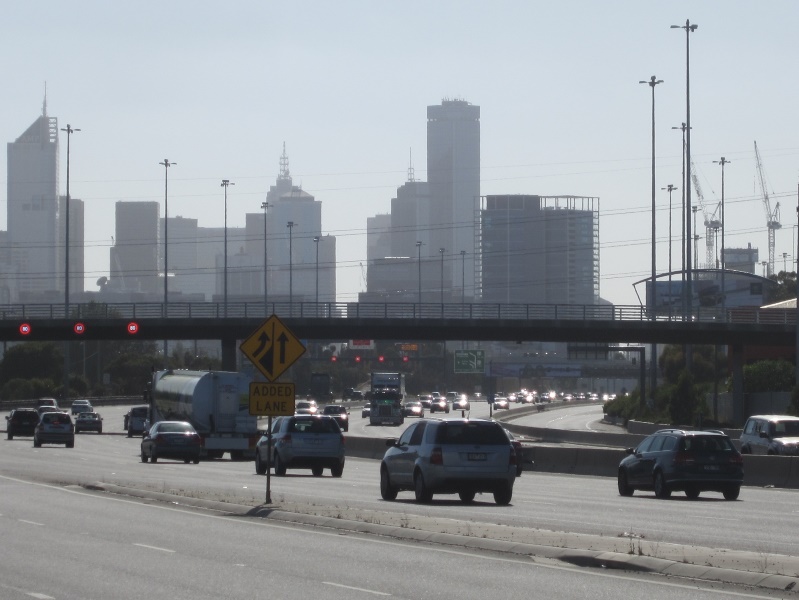 The 2014 State Budget will splurge $7 billion on new roads in the next term of government alone, yet will spend only $2.5 billion on new public transport developments in that time. This includes welcome spending on level crossing grade separations and early works on a long-awaited rail link to Melbourne Airport. But actual airport trains will still not be seen for at least a decade, the Public Transport Users Association said today.

“At last, after half a century we might finally see a train line to Melbourne Airport,” said PTUA President Tony Morton. “But even that is still a decade away. Meanwhile the Doncaster and Rowville rail extensions that were promised in 2010 seem to have disappeared off the radar. And as for the Mernda and Clyde extensions to serve our outer suburbs, there’s nothing to be seen.”

The headline item of the State Budget is clearly the $18 billion East West Link, with the government committing to start construction on both the eastern and western sections in its next term. “For all the government talks about public transport upgrades, if you look at what’s promised to be built in the next four years, this hugely expensive road leaves everything else in the shade,” Dr Morton said.

But the budget also includes the Melbourne Rail Link, a radical new plan for re-routing trains in the city centre. “The government calls this the new Melbourne Metro project, but it actually looks nothing like the Metro tunnel from the Eddington report,” said Dr Morton. “In particular, it abandons the whole idea that we need a further boost to rail capacity for the western suburbs. The original Metro tunnel had two additional tracks from Footscray to the city, and this new plan does not.”

“For years now, the government and PTV have sworn black and blue that we needed the Metro tunnel to provide extra track capacity from the west, and to develop rail capacity north of the CBD in the Parkville and Arden precincts,” Dr Morton said. “Yet they’ve suddenly decided, without explanation, that the west will do fine without extra tracks and that Parkville can be adequately serviced by upgraded trams and buses after all.”

Instead of the original Metro tunnel, the government now proposes rerouting the Frankston line toward Fishermans Bend, then to Southern Cross, before running through the City Loop and out to Lilydale and Belgrave. “It involves taking two existing Loop tracks and disconnecting them from Flinders Street,” Dr Morton said. “If you’re on the Frankston line there will be no more Flinders Street trains for you. Unless you’re heading for the west side of the CBD, you’ll now need to change at Caulfield or South Yarra.”

“Quite simply, this is policy on the run all over again,” said Dr Morton. “The government’s taken the PTV Network Development Plan which is less than two years old, thrown it in the bin and told PTV to start again from scratch. Even though it was mostly sound and the biggest problem was the timelines, not the end result.”

“The Victorian public is running out of patience with governments that come up with plan after plan, seemingly out of thin air, defend them for a couple of years then throw them away for something different,” Dr Morton said. “You can’t blame people for concluding that all our governments really care about is roads. Whatever the merits of this new rail plan, it’s such a radical departure from the practice of the past century that there should have been a public debate before springing it on people as a fait accompli.”

The budget also includes provision for bus services to new suburbs in Wyndham, including those to be served by the Regional Rail Link. Otherwise, there are no new initiatives to improve suburban bus services. “For most people living in the suburbs, the government is only offering one thing for public transport, and that’s a reduced fare for travelling into Zone 1,” said Dr Morton. “There is nothing for people who live and work in Zone 2, unless you drive a car, and ultimately that seems to be what Premier Napthine wants you to do given how eager he is to fund and build the East West Link before doing anything for public transport.”

“If the government were to reverse its priorities, spending $7 billion on public transport and $2.5 billion on roads, it would be more in keeping with the community’s preference for public transport investment, and fit us better for 21st century growth and productivity. Yet we can’t help but think that if the government gets its way with the East West Link, it’ll turn around again in five years’ time and declare that there’s nothing left in the till after all.”