Melbourne’s monthly tickets are markedly more expensive than those in other cities, a survey by the PTUA (Public Transport Users Association) has found.

“A monthly ticket in Melbourne costs around the price of 20 daily fares”, said PTUA President Daniel Bowen. “In comparison many cities price their monthly tickets at around twelve daily tickets, encouraging users to get the monthly fare even if they are only working three days a week.

“In cities known their great public transport, such as Zurich, Paris and Amsterdam, a Monthly ticket can be less than the cost of ten daily fares.

“Periodical tickets like monthlies are good for commuters, the system and the environment alike — they encourage commitment to public transport, and cut transaction times and costs.” 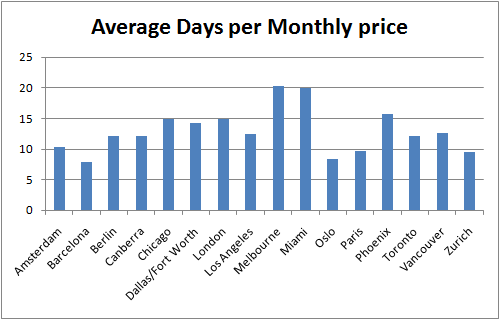 Mr Bowen said bringing Monthly ticket prices down to world standards could also provide a way out of the government’s Myki mess.

“Two of Myki’s biggest problems are queues to touch-off, and incorrect charging with Myki Money. By discounting and promoting Monthly Myki Passes, both of these problems are reduced, because Myki Pass doesn’t require touching-off, and pay-as-you-go charging doesn’t need to be calculated because the fare is paid up-front.

“This could be a win-win-win situation: provide a discount to loyal public transport users, encourage more usage on weekends and outside peak hour, and help Myki run more smoothly.

“But even if Myki is not retained, the government should look at further discounting periodical tickets, to encourage passengers to get on board more regularly, and to cut ticketing costs, queues at machines and booking offices, and speed up bus services.”

Cities surveyed included the world’s biggest metropolitan regions, and selected other areas, where information was available in English. Where zones applied, a selection of zone combinations was included. Cities were excluded if a Daily Pass (priced to be cost-effective for commuters, rather than tourists) was not available.