The Public Transport Users Association (PTUA) has called for the Australian flags on the Westgate bridge to be moved to Footscray station, in recognition that the station carries more people through it than the bridge at peak hour. 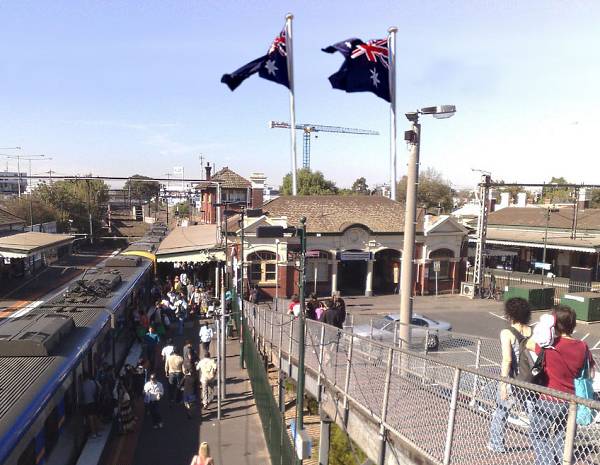 The Westgate Bridge was fitted with two flags in 2008, costing $350,000 (plus $17,000 per year in maintenance). PTUA President Daniel Bowen said that the Westgate bridge carried only 8,814 people per hour in the peak, compared to Footscray station’s 10,457 per hour.

“Footscray station is the real gateway to the western suburbs”, said Mr Bowen. “Two flags above the station booking office would be powerful symbols to recognise this neglected transport hub.

“Similarly, Clifton Hill, North Melbourne, South Yarra and Burnley stations all have more people flowing through them than nearby freeways. Huge flags above all of them would remind all of us of the importance of the train network, and give commuters something to focus on while they try to cram like sardines into crowded carriages.”

Mr Bowen noted that the cost of the Monash-Citylink-Westgate project, at almost $1.4 billion, could have paid to build major rail lines to Doncaster and Rowville, which could have brought many more people into the CBD than the motorway upgrade.

“But since the government has decreed we can’t have new suburban rail lines, let’s have big flags instead.

“Some might say that new railway lines, and more trams, trains, buses are what we need. But patriotism and pride in our public transport are also important, particularly when our metropolitan trams and trains are all run by foreign multinationals.”

Mr Bowen said he hoped the flags would be flying above Footscray Station within twelve months, by April 1st 2010.

Total passengers per hour, AM peak, through the following “gateway” stations*:

*UPDATE: We have found a flaw in the rail passenger figures above, with some services missing from the original data. The actual totals are likely to be significantly higher, particularly the South Yarra figure. We will endeavour to obtain accurate information and update it here.