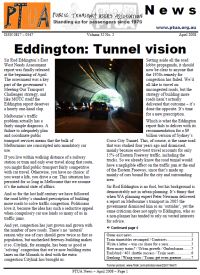 This article is from our April 2008 newsletter. Please join the PTUA to receive regular newsletters.

Rod Eddington’s East West Needs Assessment report was finally released at the beginning of April. The assessment was a key part of the government’s Meeting Our Transport Challenges strategy, and like MOTC itself the Eddington report deserves a hearty one-hand clap.

Melbourne’s traffic problem actually has a fairly simple diagnosis. A failure to adequately plan and coordinate public transport services means that the bulk of Melburnians are conscripted into mandatory car use.

If you live within walking distance of a railway station or tram and only ever travel along that route, you might find public transport fairly competitive with car travel. Otherwise, you have no choice: if you want a life, you drive a car. This situation has persisted for so long in Melbourne that we assume it’s the natural state of affairs.

And so for the last half century we have followed the road lobby’s standard prescription of building more roads to solve traffic congestion. Politicians love it, because the idea has such a seductive appeal when compulsory car use lands so many of us in traffic jams.

And yet, congestion has just grown and grown with the number of new roads. There’s no ‘natural’ reason why use of cars should grow twice as fast as population, but unchecked freeway-building makes it so. Citylink, for example, has been so good at ‘solving’ congestion that we’re now building extra lanes on the Monash to deal with the extra congestion Citylink has brought us.

Setting aside all the road lobby propaganda, it should now be clear to anyone that the 1950s remedy for congestion has failed. We’d all like to travel on uncongested roads, but the strategy of building more roads hasn’t actually delivered that outcome – it’s done the opposite. It’s time for a new prescription.

Which is what the Eddington report fails to deliver with its recommendation for a $9 billion version of Sydney’s Cross City Tunnel. This, of course, is the same road that was studied four years ago and dismissed, mainly because east-west travel accounts for only 15% of Eastern Freeway traffic, including the trucks. So we already know the road tunnel would have a negligible effect on the traffic jam at the end of the Eastern Freeway, since that’s made up mainly of cars bound for the city and surrounding area.

Sir Rod Eddington is no fool, but his background is demonstrably not in urban planning. It’s funny that when WA planning expert Peter Newman delivered a report on Melbourne’s transport in 2005 the government dismissed him as an ‘outsider’, yet the same criticism does not apply to Eddington, who as a non-planner has tended to rely on vested interests for advice.

Indeed, the east-west road is just the next link in the freeway grid the road lobby says we have to have, ever since an earlier transport plan in 1969 presented a vision for Melbourne as an antipodean Los Angeles with 500km of interconnecting motorways. The Eddington report, with its outdated predict-and-provide approach lifted from the earlier 1969 plan, is just the means to that end.

The 1969 planners themselves were also very worried about CBD rail capacity. In 1964, 92 suburban trains arrived in the city in the busiest hour of the peak (leaving out the now-defunct St Kilda and Port Melbourne lines). The planners thought this would have to nearly double by 1985, and so the city loop was born. With the loop in place, they proudly stated, the number of peak hour trains could increase from 92 to at least 160, not counting country services. The city loop would be the biggest increase in CBD rail capacity in a century.

Step forward to 2008. Thanks to a new timetable, we are now running 95 suburban trains into the city in peak hour – about the same as in 1964. And once again, planners tell us this is straining the capacity of the central-city network. Yet the city loop has been built! So where are the other 65-odd trains that the loop was built to handle?

It’s certainly not clear from the Eddington report, which proposes spending another $8 billion to duplicate the city loop with a rail tunnel from Footscray to Caulfield. There are literally hundreds of pages seeking to justify this, which nicely serves the purpose of confusing critics. But what is clear is it’s an awful lot of money to solve a problem we were supposed to have solved 30 years ago.

Many of the smaller recommendations of the report are positive. Electrification to Sunbury is long overdue; tram priority needs a whole of government focus (though we doubt that clearways are the best solution); and Yarraville residents are pleased at proposals to move trucks out of Francis Street.

More dubious is the proposal for a new train line through the middle of a green wedge connecting Werribee with Deer Park. This would make some sense if the government were so determined to build the next group of Melbourne suburbs here, rather than (say) in the Rockbank-Melton corridor where there is a train line ready and waiting. Once again, there is no capacity problem to be solved by this project, only the prospect of a lengthy detour for Geelong travellers.

Meanwhile, there’s no shortage of important and overdue, but ignored, public transport projects crying out for funding. The report delivers precisely nothing for all those already built-up areas of Melbourne that have gone without train lines for decades. Doncaster and Rowville, for example, were promised train lines in that same 1969 transport plan; they’re still waiting (and no, you can’t make buses do everything a train line does, even with a cute acronym like DART). South Morang was promised theirs in 1999, but the government is using the phony ‘capacity crisis’ to delay it until at least 2015. Meanwhile, it only takes 4 years to build an Eastlink motorway.

The more one reads the ‘Needs Assessment’, the clearer it becomes that it’s recycling old-school thinking and getting its priorities upside down. It recites all the old urban myths from the road lobby, foists a ‘let them eat bitumen’ solution on the suburbs, and subverts all efforts to manage greenhouse emissions and save suburban families from high petrol prices. Roads and public transport do not complement one another: new roads urge us to respond to our transport needs in unsustainable ways, and non-road alternatives cannot succeed while they are undermined by road expansion.

The great irony of the report is that its big-ticket rail project is doomed to become a stranded asset, due to the impact of its big-ticket road project. Not that the private sector will want to fund either. The cross-city tunnel will only attract private investment if it can act as a radial freeway funnelling cars into the CBD, because that’s the only way it could make money. But we’re assured there will be no off-ramps into the city centre. This means the road will be paid for with $9 billion of public money, which is money we need to fix our schools and hospitals, let alone our public transport.

The proposed spending on both cross-city tunnels would be better used on rail extensions to Doncaster, Rowville and Mernda; electrification to Melton; and a radical boost to bus services, as part of a building a proper multimodal public transport network for the western and eastern suburbs. These are all projects that the PTUA and the Melbourne community has backed for decades.

Even this would only use some $2-3 billion of the $17-odd billion price tag: Perth recently put in a brand new 70km train line with feeder buses for around $1 billion. With the money left over, we could then think about what new inner-city infrastructure is appropriate: but driven by evidence, not by the mystical force of its price tag.