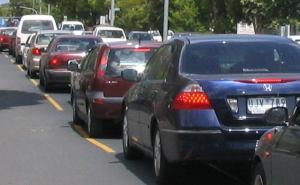 While the Federal Government finally appears to be paying some attention to carbon emissions, planning to phase out incandescent lightbulbs in favour of Compact Fluorescent Lightbulbs (CFLs), there’s no sign of directing funds towards urban public transport projects. This is despite household lighting representing a fraction of the emissions of transport – indeed, calculations we’ve done indicate that transferring just 20% of car trips to public transport services would save around four times the carbon emissions of switching all lights to CFLs.

The Howard government has historically taken a dim view of funding public transport, with Federal Roads Minister Jim Lloyd remarking to the Financial Review in April: “We’re not prepared to get involved in public transport. If the states can’t run the trains, don’t swing it over to us.”

Meanwhile the Federal Government continues to fund billions of dollars in road projects around Australia, including full or partial funding of multi-million dollar bypasses at Deer Park, Geelong and Pakenham.

While the ALP National Conference earlier this year showed support for federal funding of public transport, this is yet to materialise into any firm commitments.

With continuing pressure on petrol prices, and transport accounting for up to half of every Australian households’ carbon emissions, it is clear that giving more people sustainable travel options should be a priority for governments at all levels.