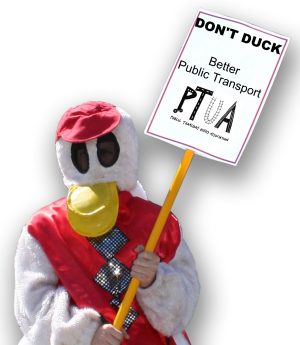 The Public Transport Users Association (PTUA) has introduced Peter the Duck, in a call to politicians from all sides to stop ducking public transport issues, particularly the lack of usable services that plagues much of Melbourne and Victoria.

“Peter the Duck highlights how often politicians have ducked the issue of public transport”, PTUA President Daniel Bowen said. “It is no coincidence that the duck has been named after our current Transport Minister, Peter Batchelor, who has absconded responsibility for much needed train and tram extensions and the goal of increasing public transport modal share”.

The PTUA launched its document The Real Transport Challenges: A Call for Vision to demonstrate the need for rail and tram extensions and more frequent bus services to mitigate rising traffic congestion and increasing petrol prices and make public transport a viable alternative to driving.

“This document is a call to action for the political parties. While we have seen much focus on pricing issues we have seen little action on improving the frequency of services or to extend public transport into growth areas”, said Mr. Bowen. “Ultimately people will not use public transport if it is not frequent, direct and fast”.

Featured at the launch was a range of bumper stickers calling on additional public transport services to mitigate the rising economic and social costs of traffic congestion.

Mr. Bowen said that while using car bumper stickers was somewhat ironic for public transport advocates, it highlighted that many Melburnians have little choice but to be car dependent. “More trains, trams and buses are the only way we can ensure less traffic on our roads”.

“Peter the Duck and our bumper stickers will form the centrepiece of the PTUA’s campaign over the next four weeks in the lead up to the State Election. With rising traffic congestion Melbourne can no longer afford politicians that simply duck the issue of public transport. It is time for all political parties to demonstrate that they have a vision and future plan for Melbourne”, Mr. Bowen concluded.