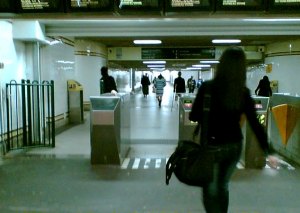 PTUA President Daniel Bowen said a study showed the popular Degraves Street/Campbell Arcade entrance to Flinders Street station had been unstaffed for about 90% of the time in the past few months, at all times of day, including peak periods.

“The vast majority of public transport passengers, who dutifully pay their fares every day, are sick and tired of seeing habitual fare evaders getting away with it”, said Mr Bowen. “While teams of inspectors are roving the system, dubiously checking tickets after people have exited trams and stations, and fining tourists, new users and others unfamiliar with the Metcard machines, there are gaping holes like these unstaffed entrances.”

Mr Bowen said anecdotal evidence indicated some habitual fare evaders were now “shopping around” to find unstaffed entrances into the station. “Who knows how many fare evaders have figured out where these holes are, and are riding for free every day?”

He added that the key to stopping fare evasion was a consistent staff presence across the network. “If people know to expect their ticket will be checked on every trip, they’ll pay every time. Whereas with random inspections, some will assume tickets only get checked every few weeks or months, and decide to risk not paying.”

Figures have shown fare evaders have only a 1 in 590 chance of being caught[1]. The PTUA believes that re-introducing staff fulltime to all railway stations and most trams would not only reduce fare evasion to a fraction of its current level, but also have numerous benefits for customer service, safety and security, and fighting vandalism.

“To properly fight fare evasion, Connex and the other public transport operators need to stop concentrating on fining people, and instead provide a consistent staff presence, to make sure most users get their tickets checked on every trip”, concluded Mr Bowen.