Why mode share is stagnant and our roads are clogged

There’s nothing that discourages public transport usage more than the prospect of long waits for services. Anybody with a choice does simply not put up with waiting, nor do they want to check timetables to minimise that waiting. They drive instead.

Studies such as the government’s unreleased Train Plan have shown repeatedly that until services run at 15 minute or better frequencies (for most trips), large numbers of choice passengers will remain in their cars.

Yet our figures have found few of Melbourne routes run at or better than every 15 minutes:

The maps below show which suburbs are lucky enough to get frequent services. Even during peak hour, a number of railway stations, including locations as close to the CBD as Brunswick and Yarraville, have services worse than every 15 minutes, underscoring why parallel motorways are so congested. Most suburbs beyond the tram system also miss out, causing most commuters to choose to drive. 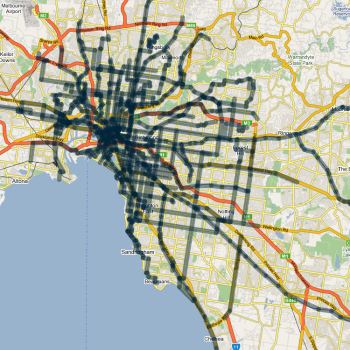 During weekday off-peak hours, trams and some train lines offer frequencies high enough to travel without timetables, but vast swathes of Melbourne’s suburbs have only infrequent services: 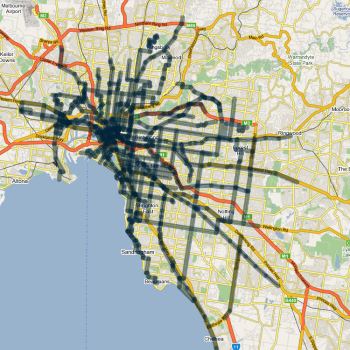 The map below shows weekend daytime services, and is even more stark – for the most part only those living in walking distance of tram lines have access to routes running every 15 minutes or better:

During the evening the situation is even worse, and it becomes crystal clear why just 8% of trips are by public transport, and why roads are increasingly congested during most times of the day. 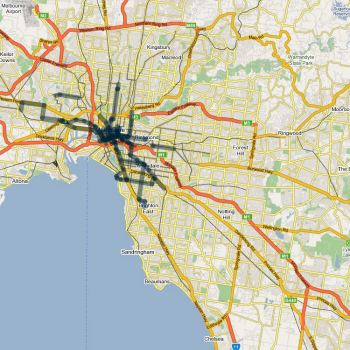 The state government’s Meeting Our Transport Challenges plan, announced in May, does little to alleviate this – which is why the PTUA has branded it a failure. Despite including billions in spending, virtually the only upgrades to 15 minutes or better will be a small number of orbital Smartbus routes, many replacing existing routes which largely meet that standard already.

Until services right across Melbourne offer frequencies that minimise waiting time and don’t require users to schedule their trips to match timetables, patronage growth and mode share are likely to remain stagnant.

Erratum: The printed version of our newsletter cited Bus Plan as emphasising 15 minute services. This should have read Train Plan.

Did we miss any routes that are 15 minutes or better on our maps? Let us know: email webmaster

This article is from our August newsletter. Please join the PTUA to receive regular newsletters.