When faced with accusations that it is spending too much on roads and not enough on public transport, it is common for the government to play the “balance” card. They argue that we need both; that there has to be a balance of spending.

It’s only when you look closer at where the new money is going that the real picture becomes starkly apparent. We studied metropolitan Melbourne’s freeway expansion projects of the past ten years, against the tram and train expansion projects for the same period. 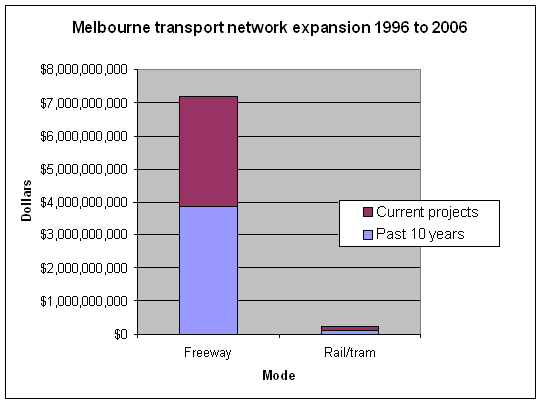 While some $7 billion has been, or is currently being spent on motorway expansion in metropolitan Melbourne, the total spent on rail and tram network expansion in that time is just $225 million, around a thirtieth. Much of the road funding comes from the private sector, but it is the government that seeks and approves of the spending and construction.

The results speak volumes for the real priorities of successive state governments. They may make noises about wanting both road and public transport systems, but the reality is it is the freeway system which is continually funded and extended, not only starving public transport extensions of funding, but directly undermining it by making it easier for people to drive.