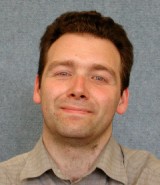 Tony Morton has been a PTUA Committee member since 1996, edited PTUA News from 1997 to 1999, and has coordinated the production of numerous PTUA policy documents, including “It’s Time To Move” in 2002.

Between 2000 and 2004 while working as a research fellow at Monash University (and travelling to the Clayton campus each day by public transport from Brunswick) he actively campaigned to improve public transport in Melbourne’s eastern suburbs as an alternative to building the Scoresby Freeway. He also helped out when the city paid its last respects to Tram Stop 7 in Collins Street, and has focussed more recently on the management arrangements needed to replace the current mismanaged regime.

Tony currently works in the city for an engineering firm that specialises in renewable energy. He admits to owning a car but prefers to use public transport as he believes it gives him more freedom.

Tony’s professional work involves the mathematical modelling of engineering systems. Experience has taught him that, whether in electrical engineering or transport planning, a computer model is only as good as the assumptions you put into it.

In the 2002 State election Tony ran in the seat of Brunswick as a candidate for the Public Transport First party. He was somewhat relieved at not being elected.

Back to Committee member profiles