Connecting to the Future is the PTUA’s alternative to the 2008 Victorian Transport Plan. It outlines Victoria’s transport crisis, explains how we got there and why the crisis continues, and sets out our proposed solution.

While the Victorian Transport Plan proposes spending $38 billion to keep us more or less where we are now, we believe Melbourne could have one of the best sustainable transport systems in the world for less than half the cost.

‘Crisis’ is not a word to be used lightly, but it’s applicable to the current transport situation in Melbourne and Victoria. Our freeways and arterial roads suffer from chronic congestion, and peak hour trains on almost all lines are overcrowded. Commuters are forced either to sit in congested traffic or to drive to a railway station where there may be nowhere to park and no room on the train. Outside a handful of fortunate regional centres the country rail network is falling apart; while on long weekends it seems every country highway in Victoria is choked with car traffic as well. And until the Global Financial Crisis hit, petrol prices had been pushing through $1.70 a litre.

Some of these problems are the direct result of bad planning decisions by the State Government. Others (such as petrol prices) are not the government’s fault, but have been made worse through government inaction. And in almost every case, the ‘solutions’ being proposed by government planners and studies are likely to make things even worse, or waste vast sums of money just to stay where we are.

Meanwhile, factors such as climate change, the peaking in global oil supplies and the failure of decades of road-building to solve traffic problems demand a new approach to transport planning.
Thanks to the way our expectations for action have been thwarted by successive State and Federal Governments, many of us have been led into a state of cynical despair, where we think it’s impossible for any of these problems to be solved. Yet the solution is neither as difficult, nor as costly, nor as time-consuming as we’ve been led to believe.

Government planners and bureaucrats use a raft of urban myths and spin-doctoring to defend the status quo and deny there is an alternative; but the evidence from here and other places suggests otherwise.

Connecting to the Future outlines how we got here, and what a sustainable transport solution might look like.

CityLink opened in 2000; the Hallam Bypass in 2003; the Hume (Merri Creek) Freeway in 2005; a bigger Calder / Tullamarine Freeway interchange in 2007 and Eastlink in 2008; yet all that time it has become harder to drive around Melbourne, not easier.

Whatever the root cause of traffic congestion may be, it doesn’t seem that a shortage of roads really has much to do with it. Transport planners have had many decades to study the causes of congestion, and what they have to tell us is rather different to what we’re used to hearing from those with a vested interest in more roads. Two points sum up the available evidence:

In no city on Earth has the attempt to ‘solve’ traffic congestion with more roads resulted in anything but more traffic congestion. But in Melbourne, this hasn’t stopped our State Government wanting to spend billions of dollars reviving old road plans from the 1960s.

Lasting solutions to congestion will require fixing up the alternatives to roads. So while lots of people will drive cars in the future, many more won’t have to drive cars. 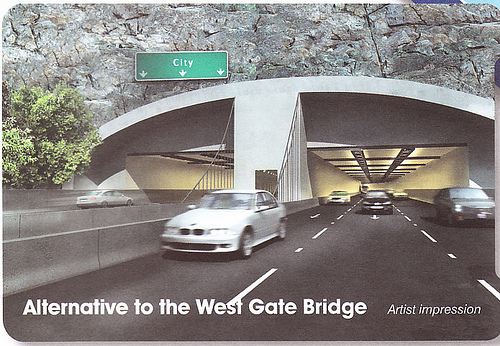 The East-West Tunnel is promoted as a freight route for trucks to access the Port of Melbourne. So why does the official plan depict cars going to and from the city?

The obsession with new roads flies in the face of our biggest contemporary challenge. Transport is responsible for around one-sixth of Australia’s emissions of greenhouse gases, or 80 million tonnes of CO2 annually. The vast majority come from cars and trucks. If Australia’s transport sector were a country, it would be one of the world’s top 50 emitters.

For many years the road lobby has encouraged the view that a combination of technology and the market—in short, doing nothing—will reduce the carbon emissions from transport as if by magic. But the necessary reductions won’t come about so easily—especially if freight volumes are to grow at forecast rates. ‘Green cars’ will play their part, but a sizeable shift from cars to public transport will be needed as well. 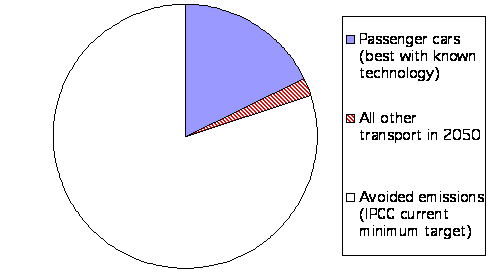 Assuming that 2009 levels of car use persist to 2050, the lowest achievable level of car emissions is shown in blue above. This is shown against the 80% reduction necessary from all forms of transport by 2050, where the entire circle represents current greenhouse emissions from transport. This doesn’t leave much room for a doubling in freight volumes!

In the 1990s, the standard urban myth about public transport was that it couldn’t be made to work because Melbourne was too low-density. But this has now given way to its opposite: the myth of the train system’s ‘capacity crisis’. It’s now said that to achieve any further gains in public transport patronage quickly or cost-effectively is simply impossible.

What we really have is not a capacity crisis, but a management crisis. Here is the number of peak trains per hour arriving at Flinders Street in pre-Loop days:

And here is the equivalent number today: 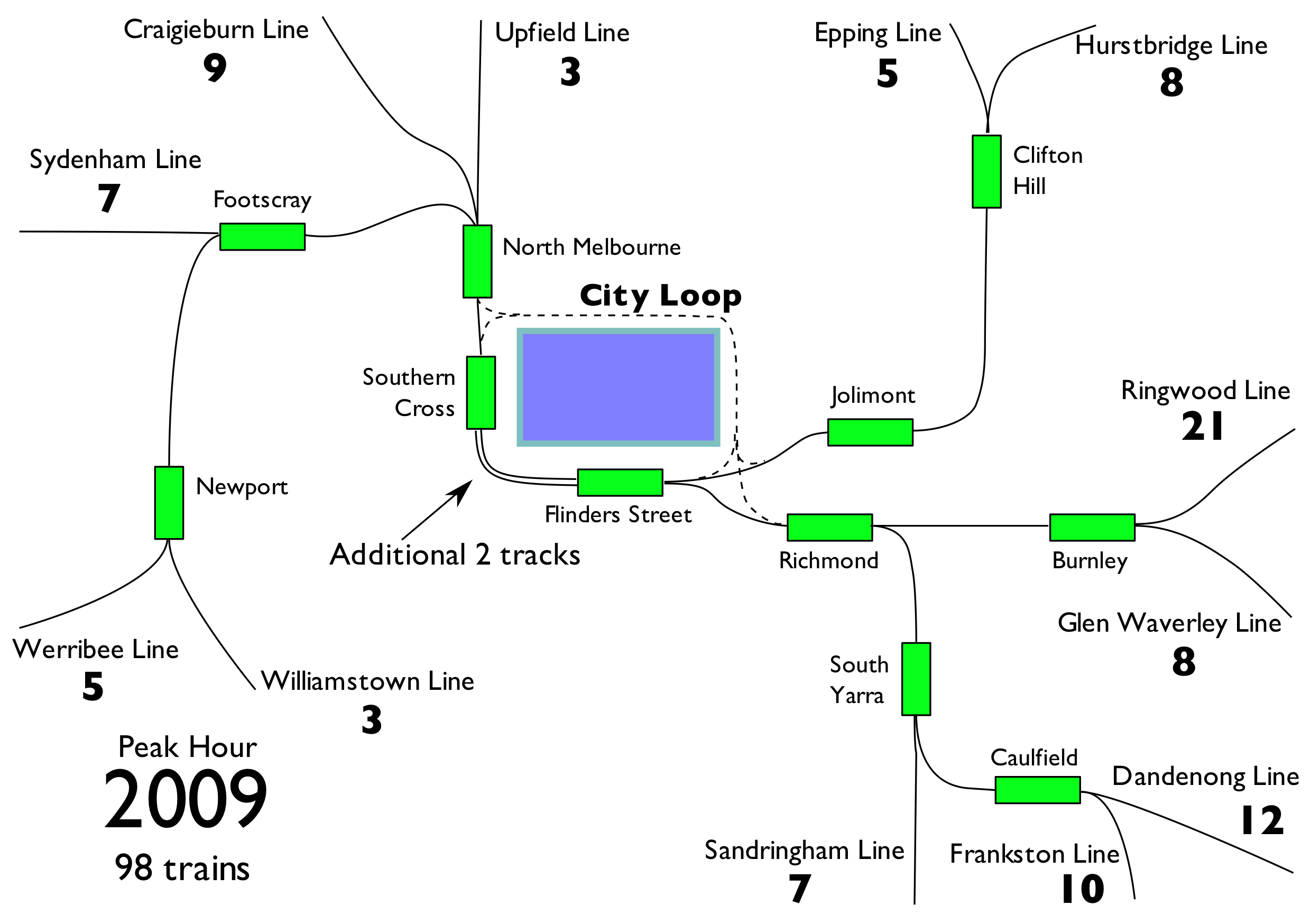 In fact, we are running less than two-thirds as many trains as the current City Loop’s planners intended. Big increases in the number of trains running are both possible and necessary!

The Solution: Learning from Experience

While Melbourne and many other Australian cities go on acting like it’s still 1969, the rest of the world has been moving forward. Many overseas cities have higher public transport mode shares, even those with fewer train lines, smaller budgets, lower population densities and fewer managers.
Even Perth—on some measures the most spread-out and car-dependent city in Australia—has doubled the size of its suburban rail network in the last decade, and plans to do as much again. Patronage growth over the past 15 years has been greater in Perth than in any other Australian city, including Melbourne. If this is possible in low-density Perth, we could do much, much better. 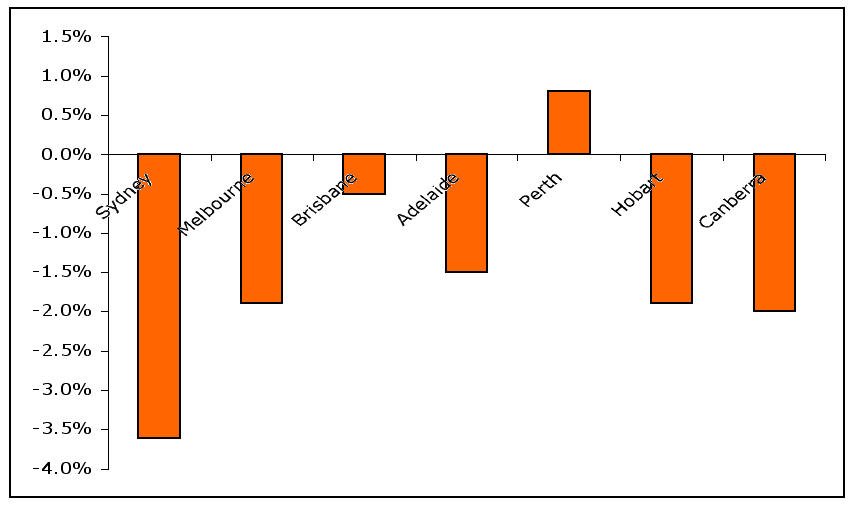 The secret of successful systems is that they make a serious effort to compete with the car by focussing not on managerial inputs and contract minutiae, but on the outcomes that matter to passengers. This is made possible by an operational culture that puts passengers first, rather than making excuses for why they can’t.

Good public transport has a number of key features: it is fast, frequent, clean, reliable, safe and cheap. Victoria’s system is mostly the opposite. The PTUA proposes the following measures to fix it.

Hand over all public transport planning functions to an autonomous, professional, and effective planning agency as exists in other cities, including Perth.

Every 10 Minutes to Everywhere: A Metropolitan Network

Where people in Casey and Cardinia go to work, from the 2006 census. Most workers travel to areas between Dandenong and the city, but planners focus almost exclusively on the 8% going all the way to the CBD. The real ‘missing link’ is the multimodal network to get the other 92% of people (now virtually all using cars) from rail stations to their ultimate destinations.

Reintroduce conductors on trams and staff on all railway stations, at a net cost much lower than Myki. Be prepared to scrap Myki if it fails to deliver.

Repair and improve the road network in ways that do not encourage additional traffic, such as through removal of rail level crossings.

Provide the community with greater control over land use planning, following the example of Vancouver.

What Would It All Cost?

The following tables compare the cost of our proposed capital projects with those in the Victorian Transport Plan. See the full report for project details and other information.

(Note: the Footscray to Southern Cross Rail Link and the Truck Action Plan (stage 1) are common to VTP and PTUA proposals and not included here. Previously funded government projects are assumed to proceed regardless.)

The next table compares the annual transport budgets under ‘business as usual’ and PTUA scenarios. As it shows, sustainable transport is easily affordable.

What You Can Do

The dream of a liveable city and State outlined in this document can be made real; but this won’t happen without ordinary people raising their voices and demanding change.

This document is a summary of Connecting to the Future, a new report by the Public Transport Users Association. Copies of the full report are available for free download (PDF, 1894k). Printed copies can be arranged for a nominal charge.