2014-2018 has seen significant public transport investment under Labor, and they have delivered on their major promises. But as Melbourne continues to grow, and demand for regional travel increases, the challenge ahead is to build a public transport network not only copes with patronage growth, but also provides usable services into areas which currently don’t have them.

So how do the parties rank?

1. Greens – in some ways the Greens have the least ambitious transport plan. But it’s full of affordable, commonsense policies. They are the only party to commit to the Metro 2 tunnel, and to frequency upgrades across the train, tram and bus networks – essential for making the public transport network vastly more usable in the short term. Accelerating the rollout of low-floor trams and implementing on-road priority, extending metro services to outer suburbs with high capacity signalling are also important initiatives. Their policy of free public transport for students is misguided, but The Greens rightly oppose the major road projects proposed by the other parties, recognising that they will simply generate more traffic.

2. Labor – some ambitious plans in starting the huge Suburban Rail Loop project, alongside continuing the successful Level Crossing Removal Program, and extensive upgrades planned elsewhere around the metro and regional rail networks. They lose points for construction of three major tollways/freeways, a lack of progress on bus and tram upgrades, and for lagging on the rollout of more frequent all-day metro train services – essential for a big city such as Melbourne.

3. Coalition – they’ve backed away from what is probably their best policy, of metro trains every 10 minutes all day, leaving commitments to build three major tollways plus other freeways, and the messy grade separation of road intersections. More positive is commitments to extend metro trains to Clyde and Baxter. Their regional high speed rail plan is ambitious, but would only speed up trains moderately, and there are doubts over whether it could really be delivered in the timeframes promised.

For more details, including a summary of minor parties, read the full report (PDF) 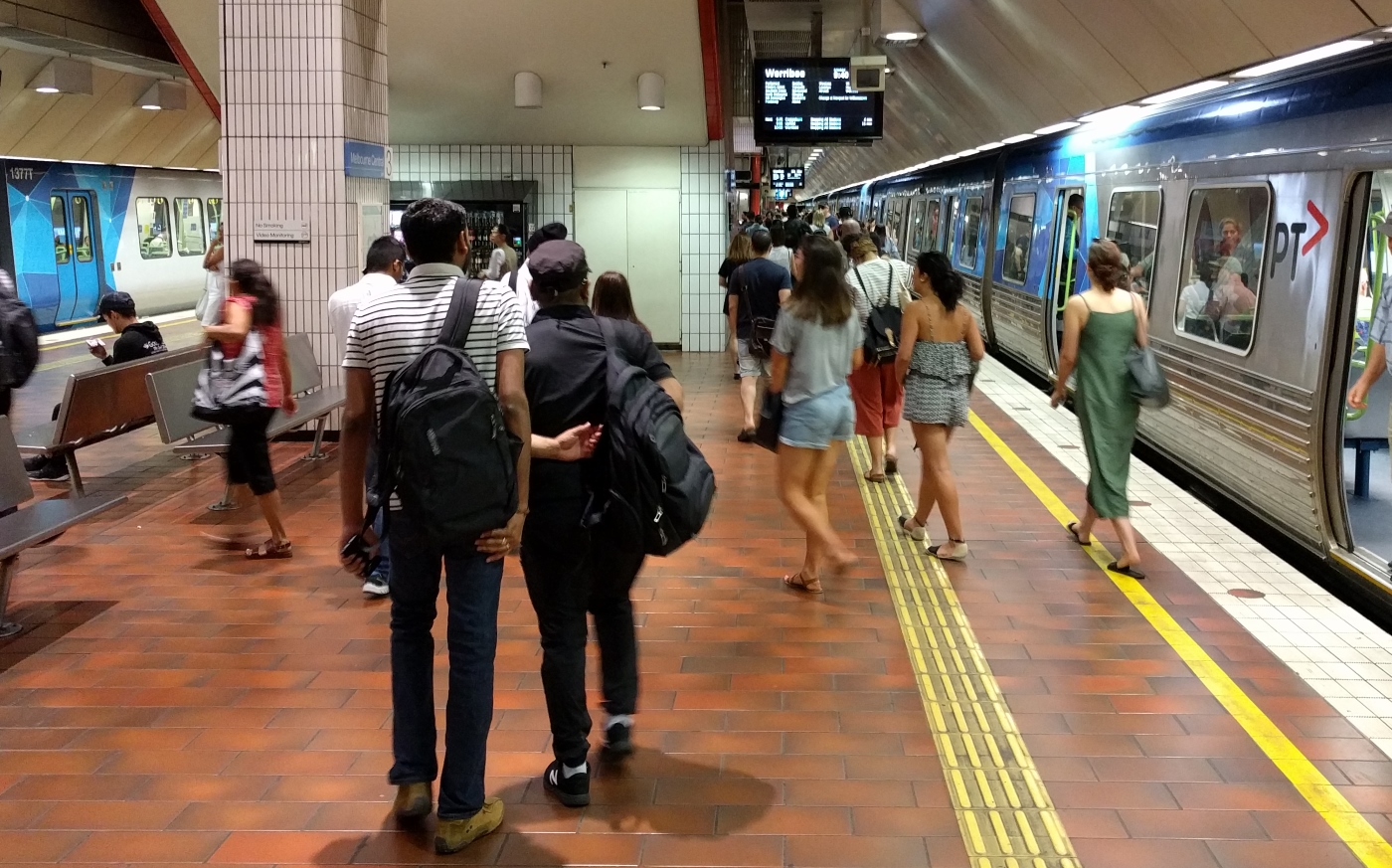 Labor today pledged funding for a plan for airport rail via Sunshine if re-elected. In recent weeks the Coalition has pledged suburban rail extensions of the Cranbourne line to Clyde, and the Frankston line to Baxter.

PTUA spokesperson Daniel Bowen said that as Melbourne continues to grow, it was critical that the rail network grows with it.

“All of these proposals are important, and it’s great to see both sides of politics recognising that Melbourne needs more rail.

“With traffic congestion now a daily issue across the city, more people are looking for ways to get around without driving.

Melbourne Airport is one of the world’s busiest without a rail link[1]. The PTUA believes the proposed rail link must be fast, frequent, affordable, and have good connections to the rest of the public transport network.

Cranbourne East/Clyde, and Baxter are likely to see strong residential growth, and extending the suburban rail network to these areas, alongside upgrades to local buses, walking and cycling, will give more people viable transport options.

But Mr Bowen warned that the expansion of public transport would be undermined by the large scale road projects proposed by both sides.

“Contrary to what the politicians will tell you, transport infrastructure is not about meeting current demand – it’s about what we want our city to look like in the future, and how we want people to get around.

“Melbourne already has more kilometres of motorway than many cities of its size.

“Well-run public transport, and especially heavy rail, can get vast numbers of people from A to B quickly, more efficiently and at less cost than in single-occupant cars. That’s why we look forward to commitments to further projects such as Melbourne Metro 2.

“To really ensure our city continues to function, to ensure people have good access to employment, education and other opportunities, the key is fast frequent reliable public transport, trains trams and buses, along with good walking and cycling options, for every suburb in Melbourne.”

The Public Transport Users Association (PTUA) has welcomed the Coalition’s pledge to order new VLocity trains for use on long-distance lines in Victoria, if elected in November.

The Coalition promise would see older locomotive-hauled trains replaced by more modern modified versions of the VLocity carriages used on commuter lines today. They are planned to include the same first class and buffet facilities currently seen on long-distance locomotive-hauled services.

“Trains used on long-distance services are past their use-by date,” Mr Westcott said. “They’ve served the state well for over 30 years, but they’re outmoded and too unreliable for a modern railway network. Faster and more dependable trains will keep regional Victorians connected to the rest of the state.

“VLocity trains work well on long-distance services to Ararat and Maryborough, so they should provide a good service on the other long-distance lines.”

While the PTUA welcomed the announcement of faster and more reliable trains, it stressed the importance of running trains frequently.

The Coalition has pledged to procure only 16 new trains, and will remove the old sets as the new ones come into service. That would mean no net increase in the number of trains running on long-distance lines.

“Faster and more reliable trains are important, but having trains run more frequently is vital,” Mr Westcott said. “Most of the lines in question see only two or three trains per day, leaving huge gaps between services.

“In many cases, the last train is in the late afternoon, so if you want can’t travel until the evening you’re stuck till the next day. Faster journey times are great, but having to wait several hours – or overnight – till the next train makes the service unusable for a lot of people.”

Mr Westcott noted that an increase in the number of trains will help provide a more usable train service, that allows regional passengers to get to and from Melbourne when they want to, and encourages more people to move to regional areas.

“Passengers hope that the Coalition is open to delaying the retirement of the older trains, and to procuring more of the new trains after placing the initial order,” he said.