IT’S certainly true that the Public Transport Users Association has not always seen eye to eye with outgoing Yarra Trams boss Hubert Guyot on every issue (The Age, 6/9). But we agree on a number of topics – none more so than the need for tram priority on our roads. END_OF_DOCUMENT_TOKEN_TO_BE_REPLACED

The Public Transport Users Association (PTUA) has hit out at what it describes as totally inadequate plans for New Year’s Eve public transport services.

“We would love to tell people they can rely on public transport to get them home after the fireworks”, said PTUA president Daniel Bowen. “But we know from past years many people will struggle to board overcrowded trams and will be left to fend for scarce taxis. The Bracks Government is clearly not serious about providing adequate public transport for New Year’s celebrations”.

Most tram routes will only have 4 trams leaving the city at 20 minute intervals, and many train lines will only get two services after the fireworks finish.

The City of Melbourne estimates that 300,000 people will be in Melbourne for the fireworks – around five times more people than a typical MCG crowd. The PTUA believes intensive, frequent extra services are required after the fireworks, similar to those used to shift MCG crowds, and that services should run later into the night to allow people to enjoy themselves for longer after the fireworks. Even if all scheduled services were used to capacity, the PTUA calculates that less 1 in 5 people in the city could use public transport to get home.

“Moving big crowds is what public transport should be best at. The public transport operators know how to do this – they do it every year for the Grand Prix, cricket and football. It’s not rocket science. We need intensive frequent services on every route out of the CBD to get people home”, said Mr Bowen.

Perth, Adelaide and Sydney are running trains all night. Sydney is running all major bus routes all night and Adelaide has free public transport after midnight aimed at encouraging people not to drink and drive. The starkest contrast comes at 2am, when Melbourne will have just 13 premium ticket Nightrider routes operating, while Brisbane will have 51 routes, Perth will have 54 routes, and Adelaide will have 79 routes running from the city.

“Melbourne’s New Year’s Eve public transport is a complete joke when compared to other Australian cities”, said Mr Bowen. “Cities with a third of Melbourne’s population and without the concerts and fireworks that attract hundreds of thousands get a far better service. Why does Melbourne deserves such a poor service?”

96% of Melbourne Central station users don’t want the popular Swanston Street exit to close, according to a survey published by the Public Transport Users Association (PTUA). The PTUA says that there is overwhelming opposition to Melbourne Central’s plan to close the exit and divert train users through the middle of the centre starting on November 5th.

The PTUA has been running the survey through their web site www.ptua.org.au, advertised on brochures distributed outside Melbourne Central.

Many station users expressed surprise when told of the closure. “People are outraged at this change”, said PTUA president Daniel Bowen. “Thousands use the Swanston Street exit to get from the trains to RMIT, the State Library, nearby offices, and by tram to Carlton and Melbourne University. Melbourne Central want them to spend money in their shops along the way.”

Mr Bowen said Melbourne Central’s estimate of an additional 55 seconds travel time was flawed because it assumed that a third of people going to Swanston Street would use other exits, when for many going via Swanston Street was most convenient. “But even if we take this optimistic figure, that’s almost a minute each way, or two minutes a day for most people”, he said. “People are telling us through comments left on our survey form and through talking to them the station entrance that they are quite rightly angered by that.”

“People don’t want their time wasted – they don’t want to be forced to battle through a shopping centre when they’re trying to hurry to work or uni or to get home for dinner”, concluded Mr Bowen.

Survey carried out on PTUA web site at http://www.ptua.org.au/surveys/ between 16th October and 30th October 2003. Responses were anonymous, but were vetted for duplicate computers (IP addresses) to prevent fraud.

Question asked: Are you happy with Melbourne Central’s plans to remove direct access between the station and Swanston Street, and instead force people to detour halfway through the shopping centre?

That is an insane idea! How utterly ridiculous. – Gail Miller

The co-location of a commuter rail station and a shopping center is coincidental. Forcing people to go through one to get to the other is just stupid. – Donald Strong

People responsible for desining and approving these plans (this includes P. Batchelor) obviously have no idea what it is like to use public transport in peak hour – this new design is ridiculous and a potential hazard during evacuation procedures! – Anonymous

This will be an added security/safety problem for students and vulnerable adults. It will also increase the difficulties for the frail and infirm and those with physical handicaps. Commercial interests should not be driving direct and easy access to LaTrobe and Swanston Street. – Anonymous

The system currently works perfectly. To the old adage ‘if it ain’t broke, don’t fix it’ – Mark Johnson

Looks like the new way through the shops will be even HARDER for people such as me who use powerchairs (electric wheelchairs) and need to go and find, then wait for, the lifts. – Ricky Buchanan

Those plans are terrible! What happens to all the uni students for Melbourne uni and RMIT who all arrive at once for their 9am lectures. Obviously Lend Lease haven’t viewed the escalators during rush hour. The DOI and M>Train should not be allowing this to happen – Ross Thomson

I thought they were trying to make public transport more attractive to users, and not drive people away. This would demonstrates otherwise. – Anonymous 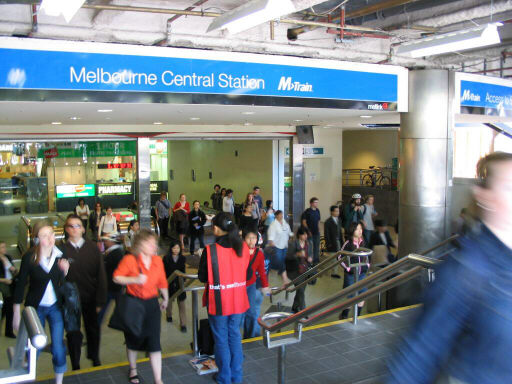 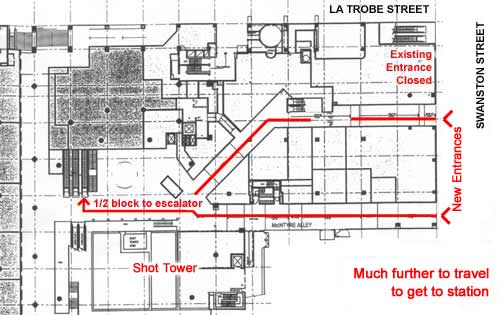 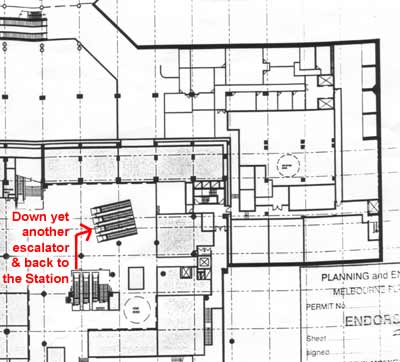